For the first time ever, daily time spent in mobile apps has surpassed desktop web consumption, according to Flurry Analytics.

Flurry found that the average user now spends 9% more time using mobile apps than the Internet. This was not the case just 12 months ago. Last year, the average user spent just under 43 minutes a day using mobile applications versus an average 64 minutes using the Internet. Growing at 91% over the last year, users now spend over 81 minutes on mobile applications per day. This growth has come primarily from more sessions per user, per day rather than a large growth in average session lengths. Time spent on the Internet has grown at a much slower rate, 16% over the last year, with users now spending 74 minutes on the Internet a day.

Consumers spend nearly half their time using Games, and a third in Social Networking apps. Combined, these two categories control a whopping 79% of consumers' total app time. Further, as we drill down into the data, consumers use these two categories more frequently, and for longer average session lengths, compared to other categories. 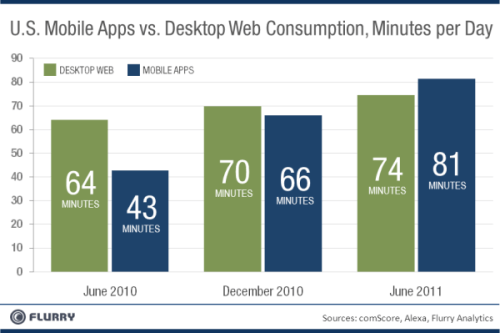 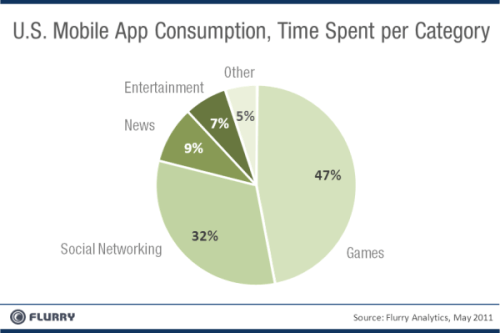