Apple has requested a court hearing on its motion to intervene in Lodsys' case against iOS developers. This comes after Lodsys filed an lengthy opposition brief to Apple's initial motion.

According to the request, Lodsys's opposition fails to rebut the appropriateness of Apple's intervention.Lodsys does not contest that Apple's technology and Apple's interest in protectingthe value of its License lie at the heart of this case, that the present defendants lack the technical informationand expertise regarding that technology and the License to fully and fairly develop theexhaustion defense, and that Apple's proposed defense and counterclaim share numerouscommon issues of law and fact with the existing suit. Thus, Apple's motion to intervene should be granted.

You can read the court filings here.

As usual FOSS Patents has an excellent overview of the situation which can be read here.

"Apple still requests a court hearing on its motion. Things may still take some more time, but there will be no more written pleadings unless the court asks the parties to address particular questions in more detail. At this stage it's possible that the court decides very quickly, and I continue to be reasonably optimistic that Apple's motion will be granted." 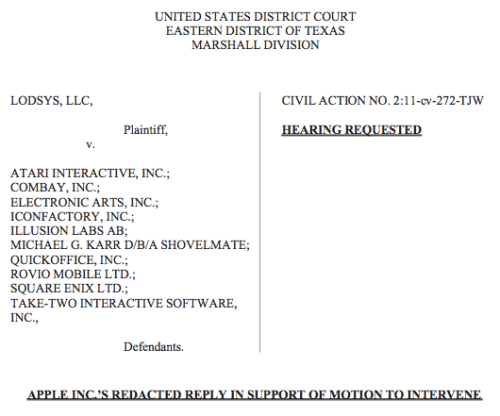