Facebook engineer Jeff Verkoeyen has left the company for Google after working 80 hour weeks on the Facebook iPad app which has been 'feature complete' since May but has yet to be released.

Verkoeyen posted the following comments on his blog which is no longer accessible. (Likely due to high traffic).

It is now nearly 5 months since the app was feature complete and I haven't seen it released except for when the project was leaked on Techcrunch. Needless to say this was a frustrating experience for me. The experience of working on this app was a large contribution to the reasons why I left Facebook, though that doesn't mean it wasn't a difficult decision.

You probably saw the app when it was infamously leaked via Techcrunch. It was feature-complete by then and for reasons I won't go into details on the app was repeatedly delayed throughout the summer.

TechCrunch believes that Facebook may be using the app as leverage in its negotiations with Apple and may have even convinced Apple to work with it on a rumored HTML5 platform project.

"Maybe they want Facebook's wildly popular social games to run inside of Facebook's apps - including the iPad app. If this is indeed the case, negotiations may still be underway. That could be why we haven't seen either Spartan or the iPad app yet, even though both are done." 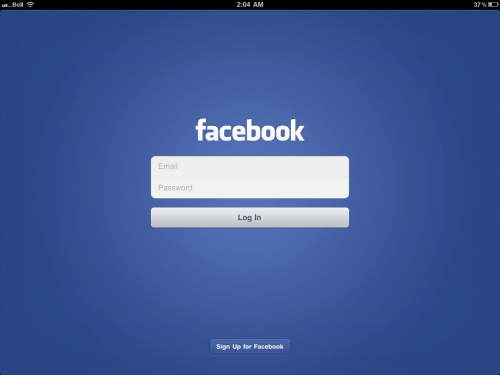 MyGigga - September 30, 2011 at 1:10am
Facebook is the new AOL. All the no-brained retards are on it not realizing they are losing their privacy and identity. Sure glad I never signed up for that POS.
Reply · Like · Mark as Spam

Not on your life - September 26, 2011 at 7:34pm
Here here... I second that! Maybe he left because even though complete the iPad app was probably the biggest identity stealer spyware we no where you are and I got all your information and I changed things constantly and make u gave me permission to use your info to access features.... I could go on and on
Reply · Like · Mark as Spam

Unhandsome_scurvy_boy ^__^ - September 26, 2011 at 8:04pm
Yep even the wiki leaks founder called it monstrous spying machine!! Down with FB!
Reply · Like · Mark as Spam
Recent