The results are pretty much as expected. Javascript performance finally catches up to Tegra 2 based Honeycomb devices, while general CPU performance is significantly higher than the iPhone 4. I suspect Ice Cream Sandwich will bridge the Android smartphone gap.

Anand also used Geekbench to determine that Apple is shipping a lower clocked A5 in the iPhone 4S than in the iPad 2. It appears that the iPad 2 is clocked 25% higher than the iPhone 4S giving the 4S a clock speed of 800MHz. 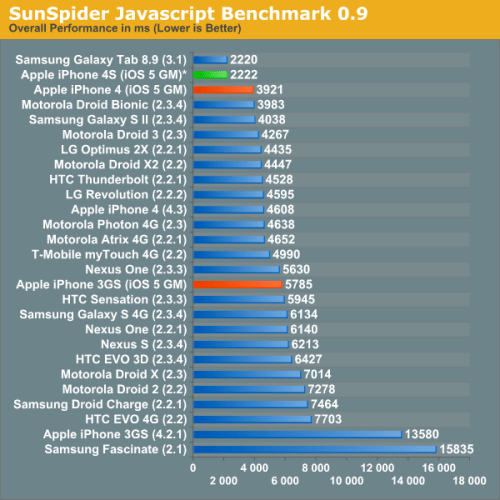 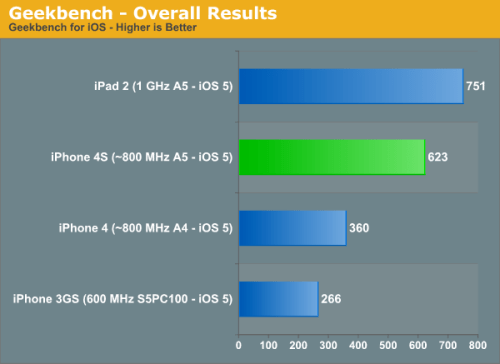 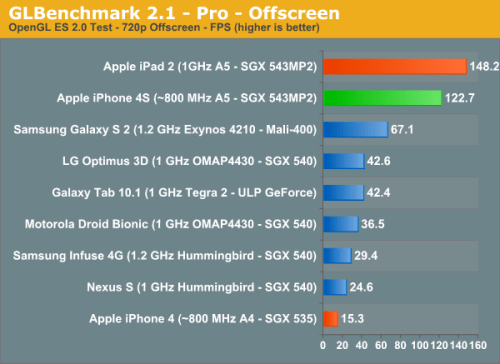 matrixmaniac - October 11, 2011 at 7:09pm
Would be nice to see the battery benchmarks next to the performance benchmarks. From what I hear and see the iPhone dwarfs Samsung's Galaxy when it comes to battery life, but it's hard to get precise and comparable facts together.
Reply · Like · Mark as Spam

Fs1034 - October 11, 2011 at 2:37pm
Just shows that the clock speed really doesn't matter, and Apple probably wouldn't underclock it without a good reason. I'm guessing the battery would go too fast at 1Ghz, since the 4s can't have as large a battery as the iPad.
Reply · Like · Mark as Spam

shojus - October 11, 2011 at 2:38pm
If you can see on that 3.5" screen, that has been the same size FOREVER, than this phone is perfect for you! I have had both apple products and others and right know the speed difference just does not justify the more than 1 inch screen size difference between the two phones but once Apple releases the 4 inch version I will bite! Just a little on the small side for today's newer smartphones... It's a shame... Don't get me wrong, It is a nice phone! Just my opinion...
Reply · Like · Mark as Spam

dancj - October 11, 2011 at 3:49pm
Actually (though I am a little disappointed) I quite respect Apple for sticking to their guns. They're all about ergonomics and if they've worked out that 3.5 inches is the best compromise between screen size and ease of use they won't budge from that.
Reply · Like · Mark as Spam
Recent