The U.S. International Trade Commission today ruled that HTC violated an Apple patent and ordered an import ban on some of HTC's devices, reports AllThingsD.

The organization found that HTC devices infringed on two claims related to an Apple patent. However, the ban will not take effect until April, the ITC said in a ruling, giving time for carriers to make transition plans and for HTC to demonstrate ways it has avoided infringement (by working around the patent, dropping infringing features or other means).

"Notice is hereby given that the U.S. International Trade Commission has found a violation of section 337 in this investigation and has issued a limited exclusion order prohibiting importation of infringing personal data and mobile communications devices and related software," the agency said. "The Commission has determined that exclusion of articles subject to this order shall commence on April 19, 2012."

HTC says it has already designed a solution to circumvent the patent.

"While disappointed that a finding of violation was still found on two claims of the '647 patent, we are well prepared for this decision, and our designers have created alternate solutions for the Œ647 patent."

You can find the full ruling here. 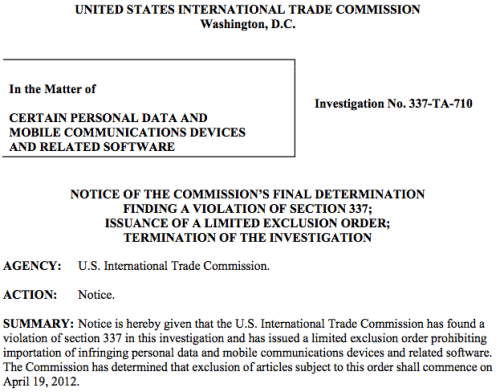