iPhone and iPod touch users who are still on iOS 3.1.3 are reportedly unable to use the App Store on their devices to download new applications, according to a growing thread on Apple's support forum.

Engadget notes that "While users of older iPod Touches and iPhones stuck on 3.1.3 by choice or incompatibility with newer OSes can still update the apps they already have and transfer software from iTunes on a computer, they can't buy or install new ones directly from the device. We were able to confirm the issue on one of our own devices, while there's a pretty lengthy thread in Apple's support forum about the issue, but no official response yet."

The original post on the matter came from mwiesner who reported the following issues with the App Store.
1) clicking on the price no longer downloads the app,
2) the ratings button does nothing,
3) the 'tell a friend' and 'git this app' buttons jump back to the top of the app window,
4) pictures usually don't show up. They usually appear as five gray rectangular boxes with white borders (though in one app one too-large-for-the-window picture shows up (see pic),
5) the 'app support' button still goes to the developer's website.
6) the 'top in-app purchases' banner is just text now.

We'll let you know if Apple takes any steps to resolve this issue. 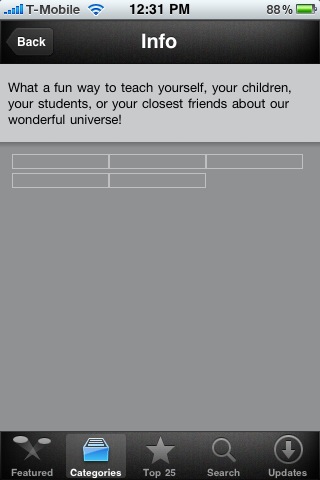 budsal - December 21, 2011 at 4:05pm
anyone running 3.1.3 is likely jailbroken and now apple is going to force them to use programs like hackulous to get apps. good for apple to force stealing. anyone who doesn't know what I'm talking about use google.
Reply · Like · Mark as Spam