Intel has reportedly notified its partners that it will 'fully release' its Thunderbolt technology in April 2012, according to a DigiTimes report.

The site notes that several 'first-tier' PC companies are preparing to launch motherboards, notebooks, and desktops with Thunderbolt support.

To speed up the standardization of Thunderbolt, Intel is cooperating with Apple and Apple is the sole vendor currently to have PC products featuring Thunderbolt technology. As demand for the technology has seen obvious growth, Intel is ready to release the technology for public use.

The IT Industry was reportedly slow to adopt Thunderbolt due to the high cost (US$20) of the chip; however, those costs are expected to drop in the second half of 2012. If the rest of the IT industry adopts the technology it will likely benefit Mac users by bringing cheaper peripherals to market. 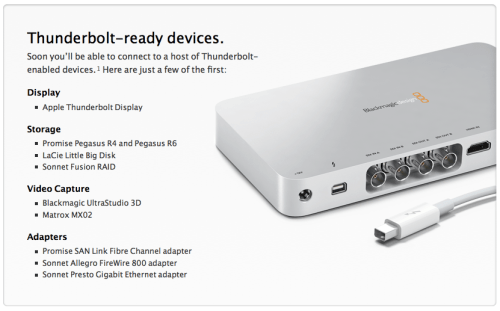