Motorola is demanding that Apple pay it 2.25% of sales for use of its patents that have been declared standard-essential, according to a new report from FOSS Patents.

The previously unknown amount was discovered in an Apple brief from January 30, 2012.

The answer is: 2.25%. I assume this relates to Apple's sales and to all of MMI's standard-essential patents, though the context is only one patent (the one over which Motorola has already forced Apple, temporarily, to remove certain products from its German online store. Assuming in Motorola's favor that this was a license to all standard-essential wireless patents, the amount still appears excessive to me given how many companies hold patents on such standards and what royalty rate this would lead to in the aggregate.

FOSS Patents notes this amount appears excessive just as Apple said in a recent statement to the press.

"While some iPad and iPhone models are not available through Apple's online store in Germany right now, customers should have no problem finding them at one of our retail stores or an authorised reseller. Apple is appealing this ruling because Motorola repeatedly refuses to license this patent to Apple on reasonable terms, despite having declared it an industry standard patent seven years ago." 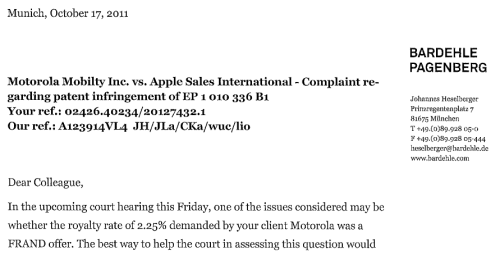 Steve Jubs the Messiah - February 5, 2012 at 7:13pm
Rather be conned by apple than the google devils
Reply · Like · Mark as Spam
Recent