Cozen, an AT&T customer who had been grandfathered in to the 'unlimited' data plan with AT&T, was surprised to receive a high usage alert from the company after reaching only 2.1GB of data use. The alert informed him that he was in the top 5% of data users and would be subjected to near unusable speeds.

Thinking there was a mistake he contacted AT&T where he was informed that anything over 2GB is top 5%.

To give you a baseline - the average data use across the country by the top 5% of AT&T smartphone customers was 2GB per month, effective August 2011.

This is a pretty despicable move by AT&T to stay within their legal requirement to offer 'unlimited' data but at speeds so slow that you would be better off switching to a tiered data plan. 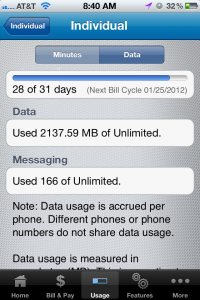 justabrake - February 16, 2012 at 10:21pm
The explanations were explained by editor from mashable website on foxnews
Reply · Like · Mark as Spam

Nick - February 16, 2012 at 9:55pm
I shwtcied to one of the new 3 cell phone companies and went from $96/month with rogers to $42 a month including tax, unlimited data, unlimited long distance north american wide etc etc. It was the best decision I've made yet!
Reply · Like · Mark as Spam

Akira - February 7, 2012 at 8:13pm
Can anyone post what they said or who they had to talk to in order to get the termination fees removed? I'd like to move to sprint
Reply · Like · Mark as Spam

SXBB - February 7, 2012 at 5:31pm
just listening to Pandora for a few days will use up my ration of "unlimited" data. Rollover would be a lopsided compromise favoring ATT that I'd be willing to reluctantly accept. Otherwise I'll be looking for a Droid on another provider.
Reply · Like · Mark as Spam
44 More Comments
Recent