Data Realms has released a version of their Cortex Command game for Mac OS X.

Story Summary:
Cortex Command is set a few hundred years into the future, where the now cybernetic human race is able to travel between stars and has already met several alien civilizations.

Interstellar trade and prosperity reigns, but there is always an ever-expanding frontier to explore and exploit for precious resources. In this gold rush of galactic proportions, fantastic adventure and brutal competition awaits.

You play as the boss of a small gold mining company that has just arrived at a newly discovered Earth-like planet. The large space ship that brought you here along with many other adventurers is called a TradeStar. It acts as a massive orbital safe haven and marketplace for the fortune seekers who venture down onto the planet's surface. Your purchases of bodies, guns, and equipment are sent from the TradeStar orbiting above and delivered to you by your choice of landing craft.

However, it soon becomes clear that the planet isn't as pristine as initially thought, and you will have to quickly adapt from your humble beginnings in order to survive and ultimately discover the dangerous secrets of this alien world... 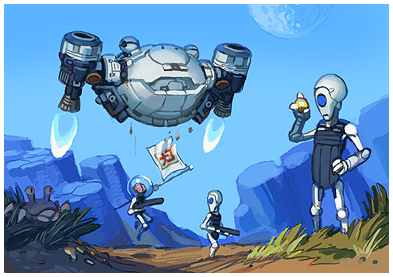