Apple has taken steps to make jailbreaking more difficult in iOS 6.1 despite a public jailbreak not being available for iOS 6.0 yet, reports i0n1c.

There must have been some change of guard at Apple.iOS6.1 adds again tougher protections although public JB community hasn't broken iOS6 yet

I0n1c is the hacker behind the untethered jailbreak for iOS 4.3.2. He also jailbroke the iPad 3 on iOS 5.1. Although i0n1c doesn't go into specifics, this is bad news for a jailbreak community that has yet to see a jailbreak for the iPhone 5 and other devices on iOS 6. 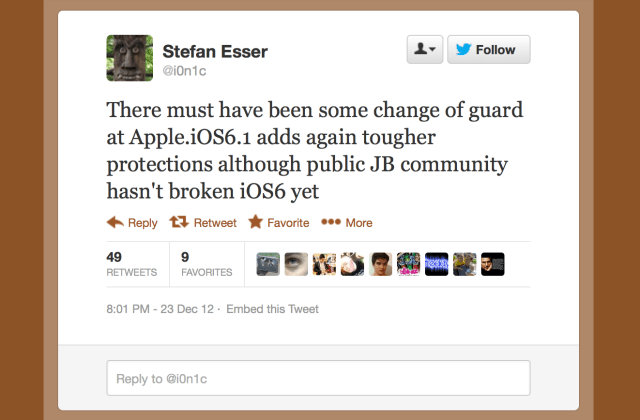 Erin - January 20, 2013 at 2:44am
Check out the CLIPCLOCK mobile app. The new social hub to discover and share the best video moments with your favorites!!! Here is the link: www.clipclock.com/download/4119
Reply · Like · Mark as Spam

Mauricio - January 11, 2013 at 5:05pm
The worst thing is, there´s a wonderful app, iBlacklist, that only works on jailbroken iphones. So I´m stuck forever in a jailbroken phone so I can use this app. I´m pressuring them to release the same app for Android, it would be just amazing.
Reply · Like · Mark as Spam

Erin - January 9, 2013 at 4:48pm
ClipClock is the ultimate video hub for the most socially shared videos! Check it out: http://www.clipclock.com/download/4119
Reply · Like · Mark as Spam