Alongside rumors of an iWatch, an Apple patent has surfaced for a wearable device with a flexible display that wraps around your wrist similar to a slap wrap.

The device would resemble a slap wrap, says Apple.

The most recent widespread use of such a device was the slap bracelet, also called the slap wrap. The slap bracelet consists of layered flexible steel bands sealed within a fabric cover. Typical slap bracelets are roughly one inch in width by nine inches in length. In a first equilibrium position they can be flat. The second equilibrium is typically reached by slapping the flat embodiment across the wrist, at which point the bracelet curls around the wrist and stays relatively secure in a roughly circular position. The slap bracelet has been used primarily as a decorative bracelet; however, other uses have included for example keeping a pant leg away from a bike chain, or even using a slap bracelet covered with reflective tape for providing increased visibility for pedestrians and bikers at night. Perhaps most usefully it is quite easy to wrap around a wrist or leg, and stays conveniently in place.

When worn on the wrist, sensors could be used to detect which portion of the band was facing up in order to keep the display oriented correctly.

FIG. 5B shows accessory device 400 in its curled state, attached to a user's wrist. As can be seen the display wraps completely around the wrist in this state creating an uninterrupted screen. One sensor that could be added to the components illustrated is an inertial orientation sensor, such as a gyroscope, or accelerometer (not shown). By including an inertial orientation sensor displayed information could be arranged so that it always faces up, or directly towards the user. This conveniently allows a user to continue viewing information on the accessory device while maneuvering the extremity it is located on. In a power saving mode the inertial orientation sensor can be configured to only activate the display when the accessory device is rotated into a specific viewing orientation, thereby saving the user the hassle of having to push a button to activate the screen while still allowing for the power savings of a standby mode. In another aspect of the power saving mode the inertial orientation sensor could generate power savings by deactivating portions of the screen oriented away from the user. Because the flexible display technology uses an active matrix light emitting diode (AMOLED) display the deactivation of unused portions of the display helps significantly. This is due to the fact that AMOLED displays can activate individual pixels, and save energy when the number of illuminated pixels is reduced.

More details about the patent can be found at the link below... 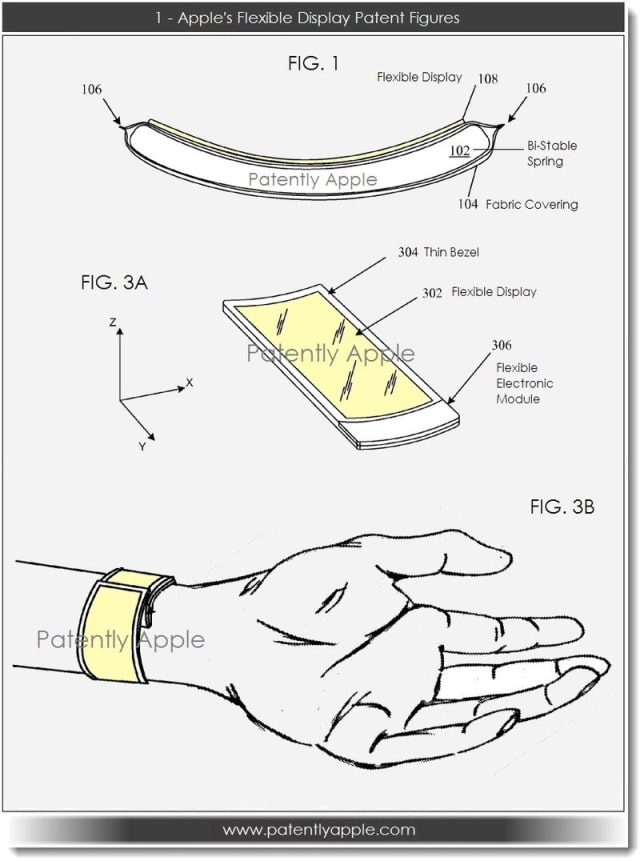 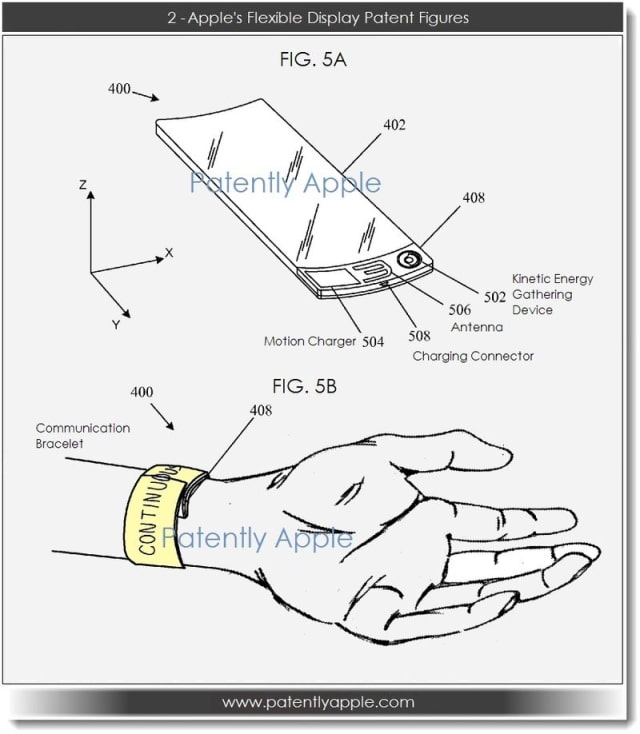 JeffreyLee4Free - February 21, 2013 at 6:31pm
I remember when snap bracelet were "cool" ... Then they became a code for sex... Different colors meant a chick would do certain things. You could walk up and slap a ho with slap bracelet and get a BJ... It was crazy how this was going on in high school. All I can think of now is that people will start doing that again with a dot matrix letting erbody know youza ho. Thanks Apple! I'll take two!!!
Reply · Like · Mark as Spam