Independent software developer Reggie Ashworth has announced AppDelete 2.2, an update to his very popular application deletion utility for Mac OS X. With a simple Drag & Drop, AppDelete will delete any chosen app with all of its associated items (files and folders) that belong to that application. Mac users will no longer have to hunt through their system to find and delete these items manually.

Just drag the unwanted application (or folder containing it) onto the AppDelete icon. Users can also select from the main menu, or right-click an item in the Finder using the AppDelete Automator workflow. AppDelete also works well in the Dock. AppDelete will then search the system to find the associated items. These items will be moved inside of a folder in the Trash named "AppDelete" with the name of the app dragged onto the icon. The folder can be inspected at any time before emptying the trash.

Version 2.2 retains all features and feel of previous releases while adding many new features, under-the-hood improvements, and faster performance during searches as well as additional language support for German, Portuguese (Brazilian), and Russian.

Feature Highlights:
* Redesigned interface and operation optimized for Leopard (also runs on Tiger and Panther)
* File selection prior to deletion of items
* Ability to search for invisible associated items via the "Hidden" button
* Now activates if an app has been placed in the Trash (AppDelete must be running in background)
* Refined and more accurate searching for associated items
* Can select between "Main" and "User" locations in the main menu
* Force Empty Trash for difficult to remove items
* Able to be added to Login Items

AppDelete also has a Undo feature, as well as the ability to "Log only" for reference. It can search for invisible or hidden items and keeps a log of all processing that it does. AppDelete is a must-have utility for software tinkerers or beta testers and the perfect companion to any Mac fanatic's toolbox.

Pricing and Availability:
AppDelete 2.2 is only $5.00 (USD) for a single user license. A full-featured demo is available and a recommended update for all customers. 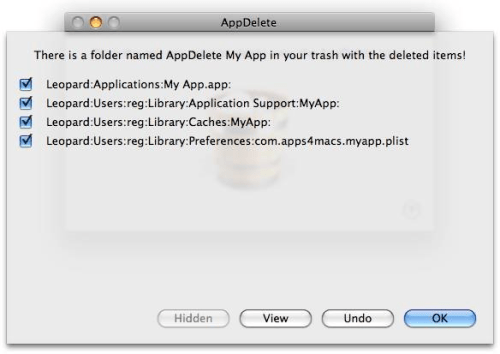