Apple iPhone activation servers are apparently experiencing some issues according to multiple reports from customers.

Many reports on twitter and various other users have told iClarified that they were having issues activating their iPhones. Reportedly, this issue has been going on for a few hours.

However, Apple Support is claiming this issue is resolved, but some users still claim its taking many attempts to finally get their device activated.

Are you have any difficulties activating your phone? Let us know in the comments...

Apple has been experiencing many server issues including activation issues just two weeks ago. 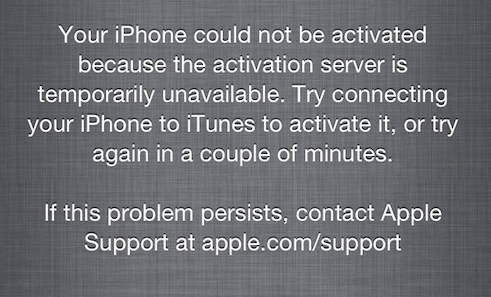 Fukran John - August 10, 2013 at 4:18pm
Apple as in a company facing issues now so who cares about activation issue. lol
Reply · Like · Mark as Spam

Viktoria - August 27, 2013 at 2:33am
2012 年 5 月 27 日An additional issue is raelly that video gaming became one of the all-time most important forms of entertainment for people spanning various ages. Kids enjoy video games, plus adults do, too. The actual XBox 360 is among the favorite gaming systems for individuals that love to have a lot of video games available to them, as well as who like to experiment with live with some others all over the world. Thank you for sharing your opinions.
Reply · Like · Mark as Spam

Armin - August 9, 2013 at 7:46am
I am no longer able to update my apps on ios 7 beta5 in the past couple of days. It is just getting frozen on pause shape when you tap on update button.
Reply · Like · Mark as Spam
9 More Comments
Recent