Gartner is reporting that sales of smartphones have exceeded sales of feature phones for the first time and Microsoft's Windows Phone has overtaken BlackBerry OS.

In the smartphone operating system (OS) market, Microsoft took over BlackBerry for the first time, taking the No. 3 spot with 3.3 percent market share in the second quarter of 2013. “While Microsoft has managed to increase share and volume in the quarter, Microsoft should continue to focus on growing interest from app developers to help grow its appeal among users,” said Mr. Gupta. Android continued to increase its lead, garnering 79 percent of the market in the second quarter.

Samsung: Samsung remained in the No. 1 position in the overall mobile phone market, with sales to end users growing 19 percent in the second quarter of 2013 (see Table 3). “We see demand in the premium smartphone market come mainly from the lower end of this segment in the $400-and-below ASP mark. It will be critical for Samsung to step up its game in the mid-tier and also be more aggressive in emerging markets. Innovation cannot be limited to the high end,” said Mr. Gupta.

Nokia: Slowing demand of feature phone sales across many markets worldwide, and fierce competition in the smartphone segment, affected Nokia’s mobile phone sales in the second quarter of 2013. Nokia’s mobile phone sales totaled 61 million units, down from 83 million units a year ago. Nokia’s Lumia sales grew 112.7 percent in the second quarter of 2013 thanks to its expanded Lumia portfolio, which now include Lumia 520 and Lumia 720. “With the recent announcement of the Lumia 1020, Nokia has built a wide portfolio of devices at multiple price points, which should boost Lumia sales in the second half of 2013,” said Mr. Gupta. “However, Nokia is facing tough competition from Android devices, especially from regional and Chinese manufacturers which are more aggressive in terms of price points.”

Apple: While sales continued to grow, the company faced a significant drop in the ASP of its smartphones. Despite the iPhone 5 being the most popular model, its ASP declined to the lowest figure registered by Apple since the iPhone's launch in 2007. The ASP reduction is due to strong sales of the iPhone 4, which is sold at a strongly discounted price. “While Apple’s ASP demonstrates the need for a new flagship model, it is risky for Apple to introduce a new lower-priced model too,” said Mr. Gupta. “Although the possible new lower-priced device may be priced similarly to the iPhone 4 at $300 to $400, the potential for cannibalization will be much greater than what is seen today with the iPhone 4. Despite being seen as the less expensive sibling of the flagship product, it would represent a new device with the hype of the marketing associated with it.”

Lenovo: Lenovo’s mobile phone sales grew 60.6 percent to reach 11 million units in the second quarter of 2013. Lenovo’s quarter performance was bolstered by smartphone sales. Its smartphone sales grew 144 percent year-over-year and helped it rise to the No. 4 spot in the worldwide smartphone market for the first time. Lenovo continues to rely heavily on its home market in China, which represents more than 95 percent of its sales. It remains challenging for Lenovo to expand outside China as it has to strengthen its direct channel as well as its relationships with communications service providers.

“With second quarter of 2013 sales broadly on track, we see little need to adjust our expectations for worldwide mobile phone sales forecast to total 1.82 billion units this year. Flagship devices brought to market in time for the holidays, and the continued price reduction of smartphones will drive consumer adoption in the second half of the year,” said Mr. Gupta. 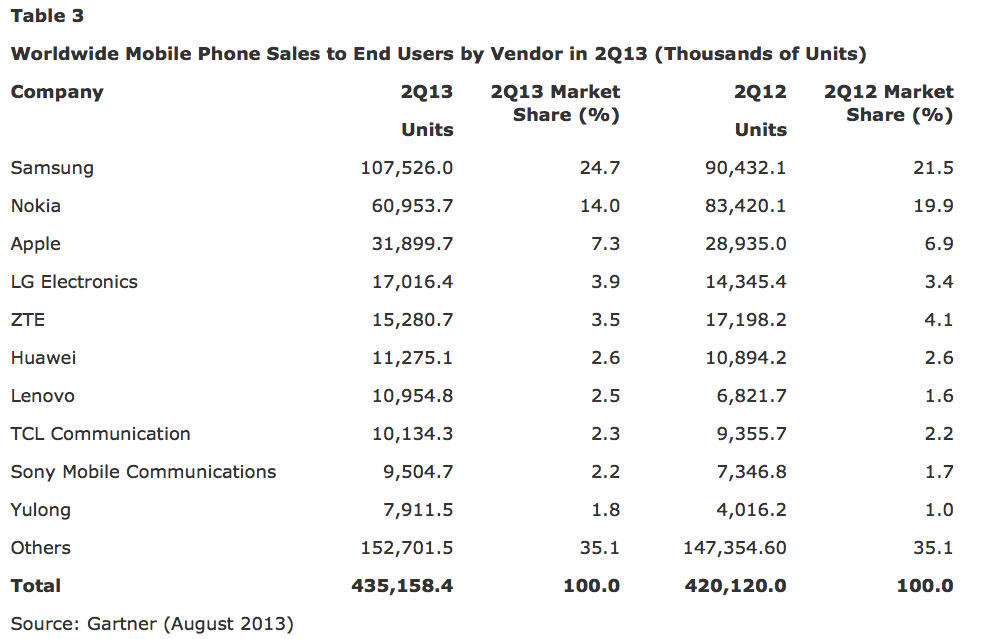