Ryan Petrich has just confirmed TweakWeek 2, a project in which a series of popular iOS developers will release a new Cydia tweak each day for a week.

Petrich is looking for other developers to participate in the project -- which will start "sometime after the iOS 7 jailbreak."

The rules state that developers must release one new tweak everyday for seven days -- and all the work must be done on release day (in one day). All releases must be open source as well.

Additionally, Petrich claims that TweakWeek 2.0 already has over 20 developers, and could last more than 5 months. 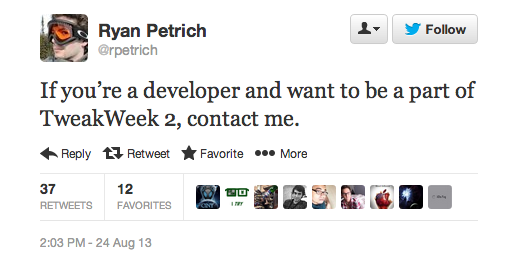 The Voice Of Reason - August 25, 2013 at 11:38am
The point of TweakWeek seems to be for the developers to show off their talent rather than provide users with stable, reliable tweaks. The fact that all the work on each tweak must be done on release day means that there could be a lot of tweaks released which are unstable. This is one of the downsides of jailbreaks unfortunately, but obviously we will still see a lot of innovation... some of which will undoubtably be incorporated in future releases of iOS.
Reply · Like · Mark as Spam

Jeffless - August 26, 2013 at 1:01am
There are no stable, reliable tweaks because there has never been a stable jailbreak.
Reply · Like · Mark as Spam