Apple has acquired AlgoTrim, a Swedish company that builds compression algorithms for mobile phones. The acquisition was first reported by Rapidus and then confirmed by TechCrunch.

AlgoTrim announced in March that it would be powering a Photo Album app for Japanese carrier KDDI. The company developed a JPEG processor that made processing up to six times faster than the standard LibJPEG technology. AlgoTrim also has a Code Compression Library that is designed to reduce the size of mobile device firmware. It is estimated that more than 100M mobile phone devices have been launched with AlgoTrim's code compression technology by several of the top-tier mobile phone manufacturers around the globe.

TechCrunch notes that AlgoTrim is working on “modern computational photography” which would provide more accurate images with sophisticated lighting and greatly improved rendering by abandoning a 2D, pixel-based model of image representation.

The work that AlgoTrim is doing in digital imaging could be very useful to Apple as a means to help the camera powers of its mobile devices jump to the next level. Not to mention that the rest of the company’s tech is generally useful, if extremely technical, in terms of helping to improve the overall operating efficiency of mobile devices. In essence, AlgoTrim focuses on getting more out of mobile processors while also chasing ever-lower power demands.

AlgoTrim's website is still up, you can check it out here. 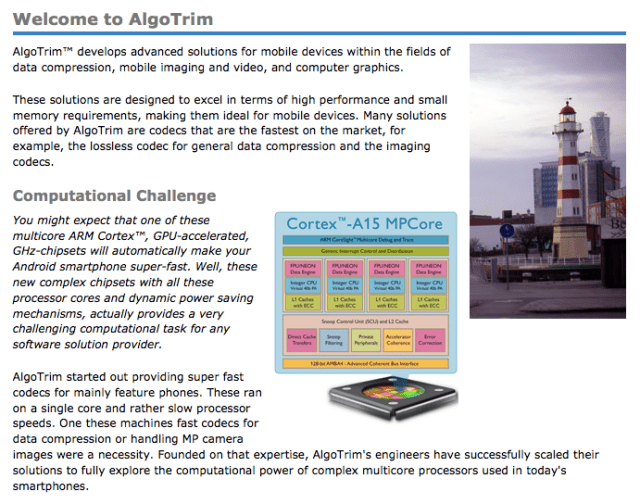 Spunky guru - August 28, 2013 at 3:27pm
Steve, you have a very negative attitude. Now the world knows why your wife refuses to share a bed with you every night. You come on this forum to vent your anger. Get a life !!!!
Reply · Like · Mark as Spam
Recent