ConvenienceWare and AssistiveWare today announced the release of GhostReader 1.6, which delivers new voices for Arabic, Greek, Russian, Italian, Turkish, British English, and Norwegian. It also provides Safari 4 compatibility and adds new large educational discounts. GhostReader is a powerful, yet easy to use multilingual text-to-speech solution for Mac OS X that reads aloud PDF, Word and other documents as well as selected text in any application. It can also convert any text to audio files, MP3s, or bookmarkable audiobooks for playback on iPhone and iPod. Sit back and relax while GhostReader reads for you!

GhostReader can be used by anyone who prefers to listen to text rather then read it. Many professionals, writers, educators and students use it on a daily basis to save time, to proof read their own writing or to learn the pronunciation of foreign languages or to improve their reading and listening comprehension. 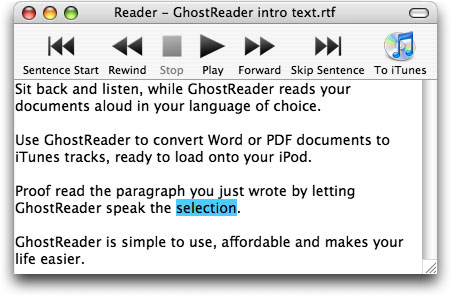