Dr. Raymond M. Soneira, President of DisplayMate, found that the Kindle Fire HDX 7 and Nexus 7 offer 'very impressive' displays but the iPad mini is a 'disappointment'.

The iPad mini with Retina Display unfortunately comes in with a distant 3rd place finish behind the innovative displays on the Kindle Fire HDX 7 and new Nexus 7 because it still has the same small 63 percent Color Gamut as the original iPad mini and even older iPad 2. That is inexcusable for a current generation premium Tablet. The big differences in Color Gamut between the Kindle Fire HDX 7 and Nexus 7 and the much smaller 63 percent Gamut in the iPad mini Retina Display were quite obvious and easy to see in the side-by-side Viewing Tests. See Figure 1 to compare the widely disparate Color Gamuts and Figure 2 to see the very large Color Errors that result. This all appears to be due to incredibly poor planning. Instead of moving up to the higher performance (and cost) Low Temperature Poly Silicon LCDs, Apple chose to continue gambling on IGZO, which has resulted in both production shortages and inferior products.

Besides issues with Color Gamut, some Retina Display iPad mini panels are suffering from burn-in leading to a shortage in supplies.

Thankfully, the iPad Air's Retina display is said to perform much better, although it too was bested by the Amazon Kindle Fire HDX 8.9.

DisplayMate concludes that being outperformed by Amazon and Google should be a wakeup call.

"Two innovative Tablet manufacturers, Amazon and Google, have significantly leapfrogged Apple by introducing Tablet displays using LTPS (in the Kindle Fire HDX 8.9 and the new Nexus 7), and they are significantly outperforming the IGZO and a-Si displays in the current iPads. Apple was once the leader in mobile displays, unfortunately it has fallen way behind in both Tablets and Smartphones. This should be a wakeup call…" 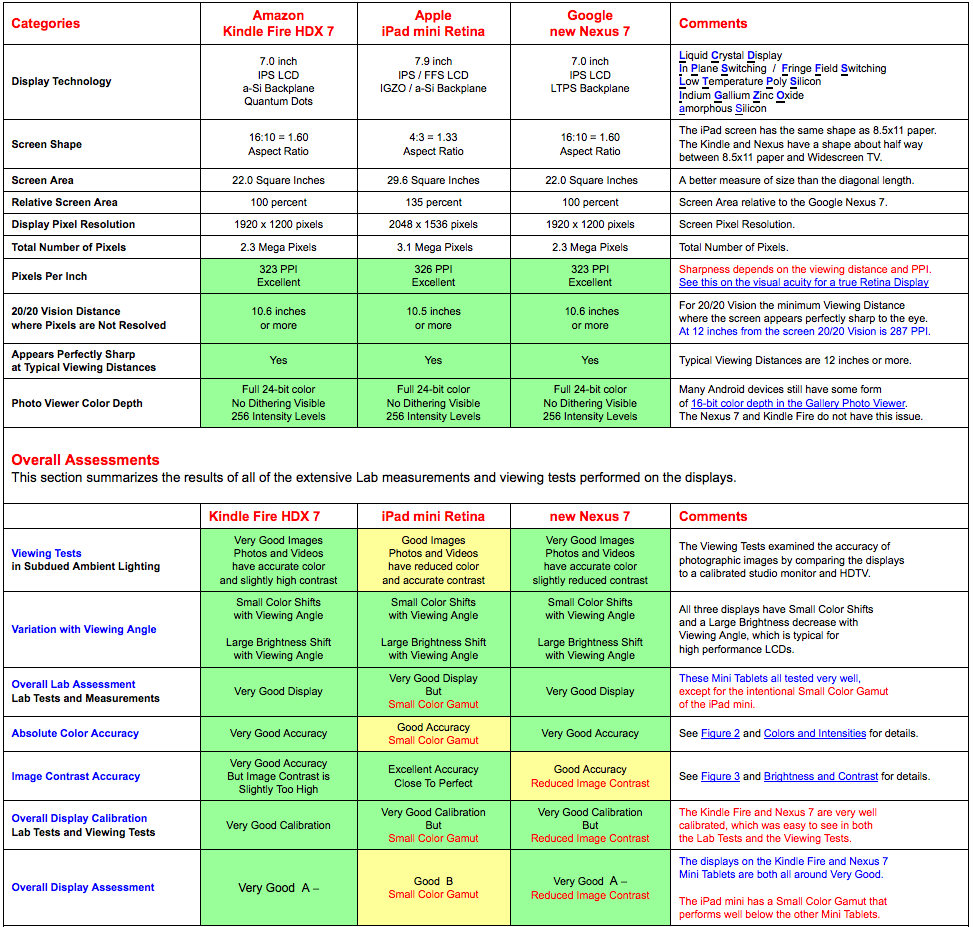 kindleon - November 30, 2013 at 2:33am
A comprehensive test carried out by Dr. Raymond Soneira of DisplayMate has said that the display on the iPad mini is outperformed by both the Nexus and Amazon Kindle Fire HD. The test was carried out across a number of parameters including resolution and sharpness, screen reflectance, colour gamut and a number of viewing tests that included measuring the tablet against a calibrated professional studio monitor. Read More : http://kindleon.com/detail.php?id_detail=67
Reply · Like · Mark as Spam