Urbansqual, a leading flash developer and The Binary Mill has announced the immediate world-wide release of the engaging and intuitive Robot Riot! 1.0. Robots are tired of doing the bidding of their human masters and they've figured it's finally time to overthrow them. In this engaging arcade puzzler, it's your job to protect humanity from the endless robotic horde. Take down wave after wave of robots, collect powerups and save the world from the Robo Riot!

How to play:
Drag an electric zapper box around a group of robots where every corner is same color, then release your finger to zap those Robots to smithereens! Groups of the same color robots within this square will combo and create powerups to further assist you in conquering the robo-threat and dominating the ultimate high score!

About urbansqual:
Urbansquall is an independent flash game developer. While they specialize in multiplayer games, they have created everything from hidden object games to side scrolling beat 'em ups. They are based in San Diego, California, but their virtual team is spread out across the United States. For more information on urbansquall, please visit them online.

Also soon to be released; Bloody Fun Day. Take charge of the Reaper as you tear through legions of grotesque cuties and their diabolical offspring in this tactical puzzler. Wield 6 unique powers to cut down the adorable denizens of a world in which all cute things must die. Coming soon to iPhone and iPod Touch!

Pricing and Availability:
In celebration of it's release, Robo Riot! will be on sale for $0.99 (USD) for a short period of time (normally $1.99) and is available immediately from the Apple App Store. 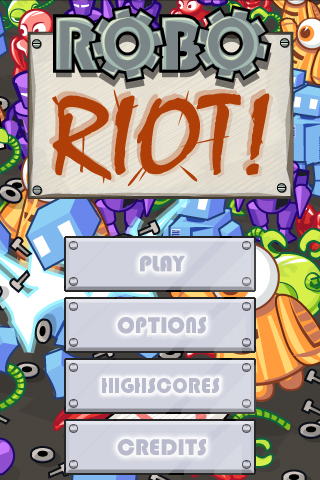