iOS 8 could likely bring split-screen multitasking to the iPad, according to a new report from 9to5mac.

Split-screen multitasking would let iPad users run two apps at the simultaneously, side by side in landscape mode -- a feature that Microsoft often criticizes the iPad for lacking. Sources also claim that the feature is designed to allow for apps to interact with each other. For instance, a user can drag content (text, video, images) from one app to another.

Apple is said to be developing capabilities for developers to be able to design their apps to interact with each other. This functionality may mean that Apple is finally ready to enable “XPC” support in iOS, which means that developers could design App Store apps that could share content.
Currently the feature exclusively works in landscape mode, and has been designed for the 9.7-inch iPad displays. It is unclear if the multitasking feature would come to the smaller-screened iPad Minis. Split-screen multitasking would also work well with the rumored 12-inch iPad Pro. 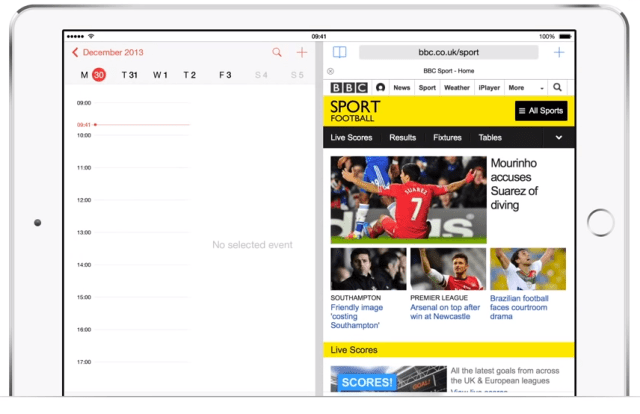 Tony - May 13, 2014 at 9:57pm
Yourmom MR K- Stealing the idea, the S series has been long around the the 3GS, then apple stole the idea of the phone cause samsung made phones way longer than apple have, apple first phone was 2007. LG was making phones longer then them, LG Prada the first touch phone. before iPhone. If there is anyone who is copying its apple. Without 3rd party companies they cant MAKE SHIT!
Reply · Like · Mark as Spam
15 More Comments
Recent