Apple sells its power adapters for $19 at its Retail and Online stores, and while you can grab a counterfeit version of the charger on eBay for a couple bucks, a recent teardown reveals the risk in using such chargers.

Ken Shirriff has done a great job of comparing a counterfeit iPad power adapter to a genuine Apple adapter over at his blog. The teardown revealed that most of the time, the counterfeit chargers are a 5 watt charger instead of a 10, are poorly constructed, and have major safety issues. The chargers look identical to each other than small differences in text. For instance, the real charger says "Designed by Apple in California" while the fake one does not.

The Apple charger has much more insulation. The upper (high-voltage) half is wrapped in yellow insulating tape. Some components are encased in shrink tubing, there are plastic insulators between some components, and some wires have extra insulation. The counterfeit charger only has minimal insulation.

The build quality of the Apple charger is much higher. In the counterfeit charger, some components are visibly crooked or askew. While this doesn't affect the circuit electrically, it indicates a lack of care in construction.

Flipping the boards over reveals that the circuitry of the genuine Apple charger is much more complex than the counterfeit. The Apple board is crammed with tiny surface-mounted components in every available spot. The counterfeit board has a lot of empty space, with just a few components. Note the reddish insulating tape in the lower center of the Apple board, another safety feature of the genuine charger.

Last year, Apple launched a USB Power Adapter takeback program which was an effort to help replace counterfeit chargers with real ones, after a few deaths occurred because of the chargers.

You can also check out his iPhone charger teardown here 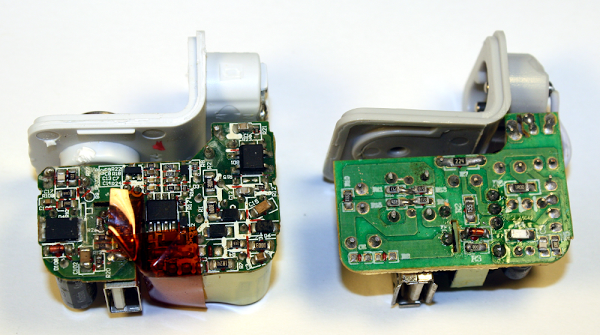 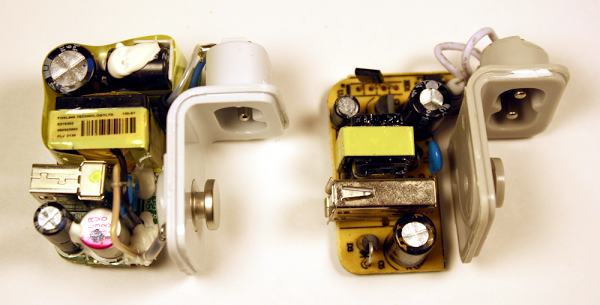 Grey - May 14, 2014 at 1:11am
What's wrong with all these Samsung die hard coming here trying to convince people that Apple is crap. They all need to STFU...nobody cares for their thoughts.
Reply · Like · Mark as Spam

Apple Trash - May 15, 2014 at 2:12am
Apple is raping you and your mama, and your father is taping it thru a samsung Galaxy. I don't give a Fuk what you think you GreyShit. All product apple make are crap, the so call innovation usb lighting cable is the worse ever, and I bet You apple intentions is to make way a lot more money by having you buy it 20 times a year($40 x 20 = $800) equals to 4 iphones you idiot. Only apple GayBoys like You support Thief Jobs ideas, wonder why The Fuk is 6 feet under. Apple is a Gay Cult, and you must be their favorite GayBoy. at the end everything is made in fuking china, so is the same crap anyways. perhaps your mother had you made in china too.
Reply · Like · Mark as Spam

Samsung Troll - May 15, 2014 at 2:24am
You raped your mind with cum defining who was the king of gay crap that ever existed from where they crawled and spewed out of, from the whilst isn't vagina aka the black hole where all you zombie minded vomit shit heads belong! Your ex is saving the best slides how for last with iPhone. No one gave a shit about your delusioned crap in the first place, who wanted to be wasted with a rotten stranger grasping after pussies, that 's just you trying to beg for fanboys to support your fan club. All samshit toys is what continue to define crap. Did they take a jd or did they take their own shit to eat again. Their CEO died because of s health which explains why they can't make any shit without apple, that's exactly why the wannabe came second the year after the revolutionary one. Only complete ignoranting bi bitches have nothing better to do than claim themselves as smart assholes, it's their way of education, thereby we don't come from your planet. Go crawl back to the rusty orifice of androids dick where you crawled out of. Better off crapping an army of clones trying to build an army of low life die hards. You must be Samshits best desperate strategy to back them up yet because it continues to work all it wants, but what good is it anyway? Their nothing but gimmicking homos. Same shit a little too late trying to be iPhone. Maybe that explains your parants' life to.
Reply · Like · Mark as Spam
27 More Comments
Recent