Apple has introduced a new feature in iOS 8 called QuickType that aims to predict the words or phrases that you will probably type next.

QuickType uses your past conversations and writing style for its suggestions. It takes into account a more casual typing style you might use in Messages and a more formal language you'll likely use in Mail. It even adjusts based on the person you are talking to.

For example, when starting a new conversation in Messages, QuickType will display the words you might start a new sentence with. ie "The", "I", or "I'm". Tap "I'm" and you will get a word commonly used next. ie. "so", "not", or "at". Tap "at" and you'll be presented with additional words that commonly follow, such as "work", "the", "least". 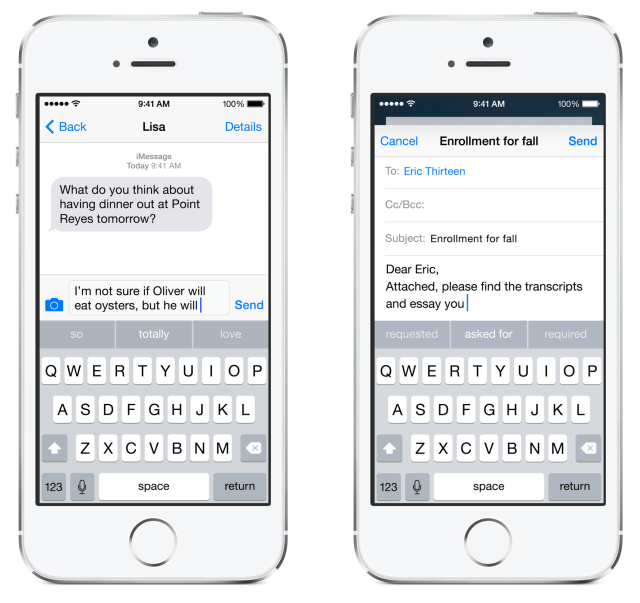 Notice how the word suggestions are tailored to the recipient and the topic of the conversation. If someone asks you a question, iOS 8 automatically recognizes this and offers you the ability to answer "Yes" or "No". 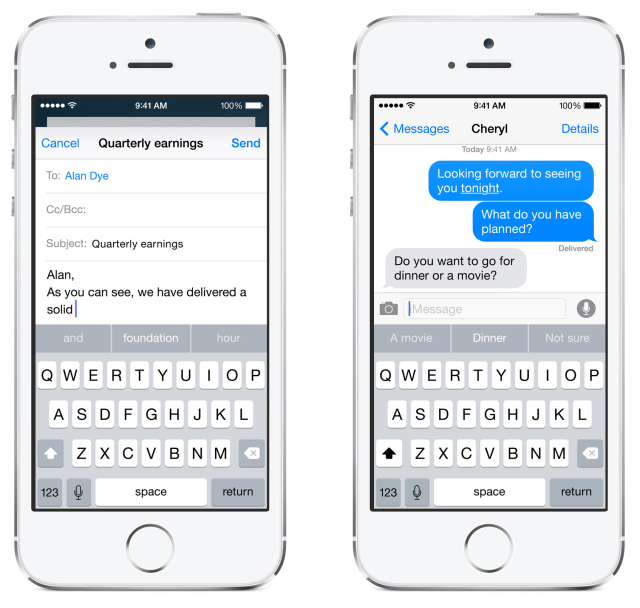 Third-Party Keyboards:
Another major improvement is support for third-party keyboards. Apple is opening up the keyboard to developers meaning that you will soon be able to choose your favorite input method or layout systemwide.

The keyboards run inside a restricted sandbox by default with no network access. If that keyboards wants access to the network it can ask you to grant that access. iOS 8 will warn you that full access allows the developer to transmit anything you type, including things you have previously typed with the keyboard.

MarkBenson - June 4, 2014 at 3:31pm
This new features are ok but this update must be called iOS 7.5 not iOS 8, Apple hasn´t done drastic improvements on iOS to asume that's a new version, I think Tim Cook is killing Apple, these all new features are mediocre. Where did you left your innovation Apple ?
Reply · Like · Mark as Spam

Dark Defenson - June 4, 2014 at 5:10pm
This update is ios 8 because first off 7.5 means just improvements, not adding extra, that's exactly what apple featured for us, don't care, then don't gimmick about it, like the revies say, ios continues to be popular and users grow because new mind blowing stuff always goes to it, your point it more than invalid than it sounds, where did the easy way of understanding this go from you? Were you even awake when seeing this? BTW if it were 7.5, ios 7.1.1 would add up to 7.1.9 then 7.2.1 and so forth but what sense does it make like that anyway.
Reply · Like · Mark as Spam

BarkMenson - June 4, 2014 at 7:08pm
You are a fuc*kin idiot. This was one of the biggest releases in iOS history and still you moan & complain. Why not go to Android and get no updates for your phone ever?
Reply · Like · Mark as Spam

BarkMenson - June 4, 2014 at 7:08pm
You are a fuc**in idiot. This was one of the biggest releases in iOS history and still you moan & complain. Why not go to Android and get no updates for your phone ever?
Reply · Like · Mark as Spam

Dark Defenson - June 4, 2014 at 7:13pm
You're the worst moronic delusional anyone has to act like. This is and has been the biggest release yet, if it was 7.5 it's the same number in the 1st digit like its bug fixes, not adding anything else therefore how the hell should we believe that shit you mag and brag? Why switch to a wannabe rusted robot that has been said and done about the review from the keynote?
Reply · Like · Mark as Spam
20 More Comments
Recent