Demand for Apple's next generation iPhone is strong, according to investment bank RBC Capital Markets. The firm surveyed more than 4,000 customers and found that nearly half of those planning to upgrade their phone will be purchasing an iPhone within the next three months. About 25% percent of those consumers said they would be willing to pay $100 more for a 5.5-inch device.

74 percent of the survey respondents stated that they are aware of Apple's probable fall iPhone launch and customers are looking for performance improvements as well as a larger display on their next iPhone.

While ~49% of smartphone purchasers are inclined to buy the next Apple product, we learned that the main driving factor for sales surround performance improvements (battery life 33%, processor 18%, camera 12%). In our view, these results are positive for AAPL, as we would not be surprised to see improvements to both battery life and processing speed with the iPhone 6. Finally, beyond performance improvements, we also learned that screen size could materially impact sales, as 23% of participants surveyed are inclined to purchase a larger screen iPhone.

Many analysts believe that the next generation device will cause iPhone sales to surge as customers jump to larger screens. RBC claims Apple could see a 15-20 percent jump in unit sales year over year.

Yesterday, a report from Bloomberg claimed that the 4.7-inch iPhone could launch along side the 5.5-inch device, despite rumored production issues on the larger 5.5-inch model. iOS 8 is expected to rollout with the next generation iPhones this fall. 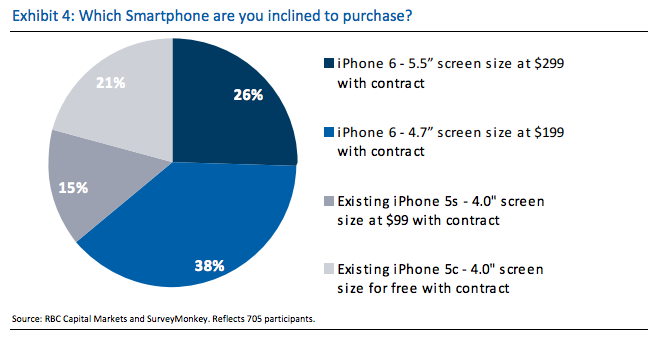 Za - June 25, 2014 at 12:24pm
I see people carrying those large Android screens, and it looks like an IPad mini. Ridiculous. I don't want a bigger screen. Most people I know are the same. I think the news media is out there "android has it, now Apple has it, apple will be behind the game if they don't!!!"
Reply · Like · Mark as Spam

Fukscrawn John - June 25, 2014 at 2:21pm
And that will be the only thing in their way. If jobs asked how people feel about screen size, the 6 would have came a little early but there also would've been a bigger model before this. People give up iPhones just for screen size because that's their main focus, the second is how good the os is and I have heard them say "I'm with android for size but the os sucks". No joke.
Reply · Like · Mark as Spam

Krapatis - June 25, 2014 at 1:54am
People need to move on with Jobs, why does he matter to Apple if they pulled through without him? Who cares what Jobs wanted especially for someone who's against apple, such logic for samsheeps, but seriously even if he was alive today, what choice would he have today? Would he lay this off and let people get tired of the same sized phone, he eventually would agree to do this, he always listened to what users wanted most so he alive or not, doesn't matter what he thinks anyway. Apple always get what they wants, but the way delusional blushed bitched like you see it, you can't accept how shit is, Apple always gave people battery life and the ones on MacBooks clearly explain and besides everyone has been making thinner phones and no shit about that, it makes one hand use comfortable.
Reply · Like · Mark as Spam

NoGoodNick - June 24, 2014 at 11:55pm
I can believe these (all except the demand for the 5c, since it didn't sell nearly as well as expected). The current 4" screen fits perfectly in a men's shirt pocket. The 5.5" is like the iPad mini, they're designed for women with purses. Since they don't have shirt pockets a normal phone gets lost and a full iPad is too big (it gets scratched). The mid-range devices are perfect since they're easier to find in a crowded pocketbook. (Can we all say 'sexist'?)
Reply · Like · Mark as Spam
5 More Comments
Recent