The team behind the Pangu jailbreak stopped using a bug discovered by i0n1c in the latest version of their utility, apparently burning another exploit in the process.

Many were already upset that the team released a jailbreak for iOS 7.1.1; rather than saving the exploits used for a potential iOS 8 jailbreak.

At the time of initial release I0n1c declared, "if pangu team releases a public jailbreak with vulnerabilities disclosed to them during my training I consider this in no way okay." It turns out the team was using his vulnerability.

The new 1.1 version of Pangu released today has replaced this exploit with an infoleak bug: Using new info leak bug instead of @i0n1c's.

Commenting on the update MuscleNerd said, "Don’t see that often! Pangu says they replaced some of last week’s exploits with new ones in today’s 1.1 update."

I0n1c said, "Hilarious so the guys from Pangu want to re-release their jailbreak and do not use my bugs? So they finally admit their actions were bad. The JB scene will love them for wasting even more bugs on something unimportant like a .1 upgrade."

He also noted that that jailbreak still uses functions of his: "So new Pangu most probably kills more bugs, which is a shame because they needlessly killed various infoleaks from the training. But new Pangu is still linked against my code and has my watermarked functions in it..."

You can find instructions on how to jailbreak using one of the tutorials below... 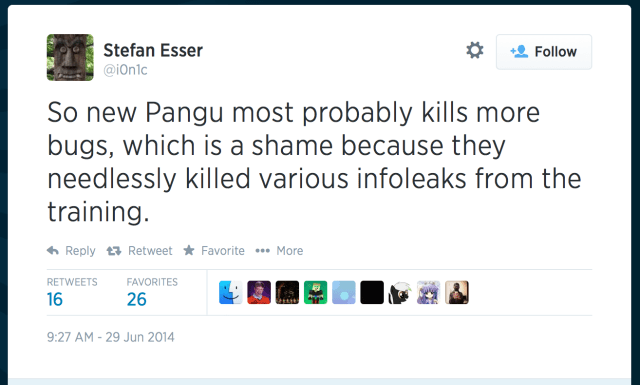 Panguboot - July 29, 2014 at 4:13pm
The whole process of Pangu jailbreak was described http://panguboot.com/syscan-pangu-jailbreak-features/during the Syscan360 conference at Beijing by @windknown team member
Reply · Like · Mark as Spam

JohnnyBGoode - July 29, 2014 at 1:32pm
If the whole point in saving an exploit is so we'll get a JB sooner for the major iOS releases, then why does it still take so long for a JB to be released?
Reply · Like · Mark as Spam

Love My IPhone - July 1, 2014 at 5:14am
Had to say jst a few quick things. Many people forget since the jb last year, so many people have bought new iPhones since & with newer iOS versions on them they have to wait 6-9 months or even more till the next new iPhone release & jailbreak while being teased by dev team with videos showing they have their iPhones jb with the newer iOS versions out making the rest of us wait due to no fault of our own. I bought my 5S in February at an att store and it came with 7.0.3 so I was lucky but if I had to wait till near Xmas to jb it I would be pissed. Hint: if buying a new iPhone it's better to get from att, etc rather than apple as phones from Apple will always be updated before you get it. I'm not going to use the new jb as there's no need to for me but again I was lucky when I bought mine. I'm on the fence as to whether it should have been released but if I wasn't already jb I would be happy it came out. Please people be kind to each other on here.
Reply · Like · Mark as Spam
1

JohnB - June 30, 2014 at 8:43pm
Pangu: Your the man. Don't worry abt all those idiot iOs 8 waiting people and those bullshit jb leak video. They just jealous that your teams release b4 them and made the headline. Apple release iOs every f*ken month and there's no point of holding off jb if you find a way to jailbreak. Just cuz your Chinese, these ppl doesn't appreciate your release. "Oh God a Chinese release an app - it's gonna be a trap..." idoit racist ppl. I bet 90% of ur stuffs in your household made from China. Or, go tell Apple Mgf to assemble in USA instead of China.
Reply · Like · Mark as Spam
60 More Comments
Recent