The worldwide tablet grew 11.0% year over year in the second quarter of 2014 reaching shipments of 49.3 million units, according to International Data Corporation. However, shipments declined from 1Q14 by -1.5%.

"As we indicated last quarter, the market is still being impacted by the rise of large-screen smartphones and longer than anticipated ownership cycles," said Jean Philippe Bouchard, IDC Research Director for Tablets. "We can also attribute the market deceleration to slow commercial adoption of tablets. Despite this trend, we believe that stronger commercial demand for tablets in the second half of 2014 will help the market grow and that we will see more enterprise-specific offerings, as illustrated by the Apple and IBM partnership, come to market."

Despite declining shipments of its iPad product line, Apple managed to maintain its lead in the worldwide tablet market, shipping 13.3 million units in the second quarter. Following a strong first quarter, Samsung struggled to maintain its momentum and saw its market share slip to 17.2% in the second quarter. Lenovo continued to climb the rankings ladder, surpassing ASUS and moving into the third spot in the tablet market, shipping 2.4 million units and grabbing 4.9% markets share. The top 5 was rounded out by ASUS and Acer, with 4.6% and 2.0% share, respectively. Share outside the top 5 grew to an all time high as more and more vendors have made inroads in the tablet space. By now most traditional PC and phone vendors have at least one tablet model in the market, and strategies to move bundled devices and promotional offerings have slowly gained momentum.

"Until recently, Apple, and to a lesser extent Samsung, have been sitting at the top of the market, minimally impacted by the progress from competitors," said Jitesh Ubrani, Research Analyst, Worldwide Quarterly Tablet Tracker. "Now we are seeing growth amongst the smaller vendors and a leveling of shares across more vendors as the market enters a new phase."

During Apple's earnings call this week, the company revealed that iPad sales were gated due to a reduction of inventory by 500,000 units. 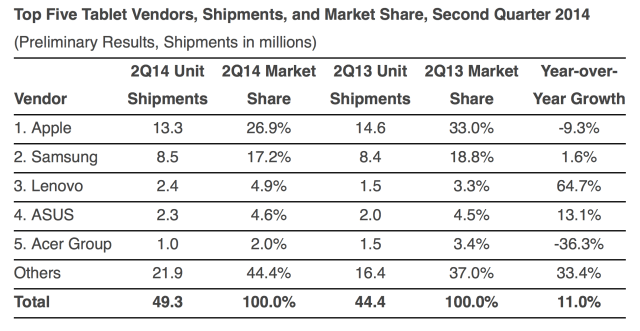 LOL - July 24, 2014 at 8:06pm
But you are lucky enought if you haven't sold anything yet that's been made in the 70s or a little later, it may be very rare in the future or you may get one for free at Christmas.
Reply · Like · Mark as Spam

Ren - July 24, 2014 at 7:09pm
With so many things iOS 8 is bringing, this will step up Apple's game along with IBM, so I doubt samshit will takeover the superior. Microscopic shit on the other hand, the can brag about how better they think they are even if that changes nothing even by a little, but they'll still won't make it any easier to figure out how scrambles the screwed Windoze 8 is so they don't have a chance either.
Reply · Like · Mark as Spam

Tavolio - July 24, 2014 at 6:28pm
if they continue selling Ipads, without gsm calling, they will continue losing the share market, Samsung is taking this part, as well all the new tablets with gsm calling capability
Reply · Like · Mark as Spam

IBM - July 24, 2014 at 7:03pm
That's why we are with Apple, to keep them from having the wannabes win. Samsung never had a chance and nothing beats ipad as said when it comes to the 'best tablet' as mentioned by jd power.
Reply · Like · Mark as Spam
Recent