United Airlines today announced that the carrier will equip its flight attendants with Apple's iPhone 6 Plus. The company says this will put important safety and service information at flight attendants' fingertips while enhancing their ability to meet customers' needs.

The airline will begin distribution to its more than 23,000 mainline flight attendants during the second quarter of 2015. Upon introduction, the devices will have the ability to handle most onboard retail transactions and will enable access to company email, united.com and the company's Intranet as well as policies and procedures manuals.

Future enhancements include replacing the flight attendants' printed safety manual with an electronic version on their iPhones and providing real-time reporting and improved follow-up on aircraft cabin issues and repairs. Additionally, United plans to develop a number of customer-focused tools for the device.

"We are thrilled to make this investment in our flight attendants," said Sam Risoli, United's senior vice president of inflight services. "iPhone 6 Plus will enable them to deliver an even higher level of flyer-friendly service and will offer our flight attendants simple, one-touch access to valuable work information, enabling them to better serve our customers."

The deployment of iPhone 6 Plus for United flight attendants follows the airline's deployment of iPads to pilots beginning in 2011, in a move toward creating paperless aircraft and flight decks. United has renewed the iPad pilot program with iPad Air 2. 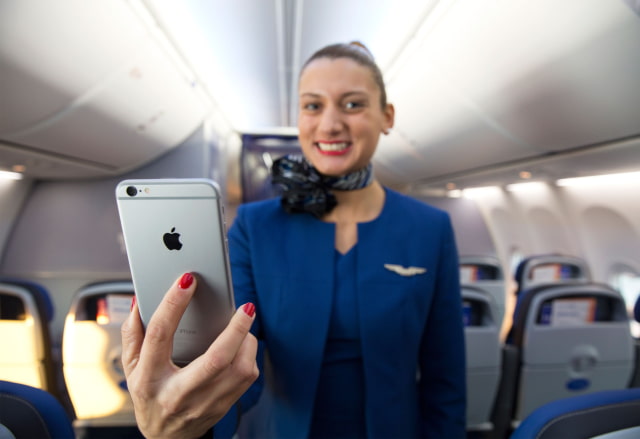 Rebecca Whiting - December 11, 2014 at 6:27pm
Damn, I knew this would happen after I leave. Can you imagine how much money the company will be saving not printing those revision. That is what kept me in the job for so long. Love those revisions.
Reply · Like · Mark as Spam

Taco el pastor - December 11, 2014 at 3:25pm
lol United is the worst. This will add to their ignorant and crabby attitude.
Reply · Like · Mark as Spam