Apple is expected to ramp up Apple Watch production after strong pre-orders sold out its initial supply, reports Reuters.

The company completely sold out of the device within six hours of it becoming available for pre-order on April 10th. Many models currently have an estimated ship date of 4-6 weeks, others won't ship until June or July.

Analysts believe that Apple could sell between 2.3 to 4 million units in the quarter ending June. Typically, Apple would have released pre-order numbers today; however, it did not, possibility due to the supply issue.

Piper Jaffray analyst Gene Munster said, "Overall we view the trends over the weekend as an indication of solid demand paired with very limited supply, with supply being the most significant limiting factor."

Munster expects Apple to ramp up production between mid-May and June.

A recent Slice Intelligence study estimated that Apple took 1 million pre-orders in the United States on the first day of sales. In comparison, sales of all other Android-power smartwatches totaled 720,000 in all of 2014. 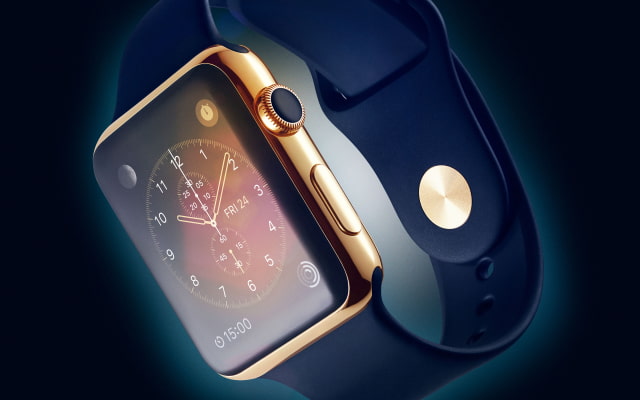 Cheddar made - April 14, 2015 at 7:57am
Not-picky like every soulless samsheep! Quick, downgrade to dunce level to make such desperate excuse to defend hipster shit junk watches that can't compare to the apple watch master. You do realize I am going to win one out of a prize vault machine when they out the next new Apple product in it where I win after one attempt every time. I saved hundreds and thousands from buying Apple products and won MacBook iPad and iPhone. So-called problem solved!
Reply · Like · Mark as Spam

Zetaprime - April 14, 2015 at 3:13am
How is it that every time Apple releases a new device they never seem to have manufactured enough of them? I smell bulls#%* there. The whole thing is engineered to create the perception that one needs to hurry up and buy one right away before they run out when actually they were capable of making enough units right from the start to satisfy demand. And they have enough experts to know just how big that demand actually is. Don't believe for one second that they don't know and that they were caught by surprise. Now that having been said..I use Apple products and will continue to do so, but I don't like the dishonest ways they use to manipulate the public. Apple of course, is not alone in this and if I were to boycott companies with questionable ethical practices I would not be able to buy anything, since all are guilty.
Reply · Like · Mark as Spam

PaladinLV - April 14, 2015 at 4:14am
Ah yes! A conspiracy behind every tree. What SMART business is going to make 1 million units and find out they only sold 500K? A SMART business creates supply and demand. Make some and if orders are good and the folks want it, then and only then ramp up. It's not DISHONEST - it's SMART business. But from a stock holder perspective - it WORKS! BTW - I'm one of those people that will be waiting until June for mine to ship and no problem.
Reply · Like · Mark as Spam
1 More Comment
Recent