Clever Coding has announced the official release of their iPhone 3D globe source code. The source code is created in a way that developers can easily drop it into their project and add a 3D globe to their App in less than an hour.

Clever Coding has been developing client apps since last July. To date they have create over 35 Apps for themselves and clients around the world. Many of their clients were requesting a 3D globe be added to their project. They began the ground work for an API that could be dropped into a iPhone App project. What they have ended up with is an API that can easily be integrated into a project and have it up and running in less than an hour. The code is written in a way that it can easily be extended to create custom effects that naturally blend into the App.

Some of the features of the globe are:
* Zooming and navigation of the globe with standard iPhone gestures
* Smooth rotation between two sets of GPS points
* Multiple high resolution texture maps of the globe
* Textures that shows country borders and names
* Adding effects on the globe at a given set of gps coordinates. This can be a glowing effect or drop pins like on a travel map
* Code is well comment and structure so that it is easy to extend
9 Ability to double tap on the screen and have the code translate the tap into the GPS coordinates of that location

The source code is now available for purchase. The code includes a demo App that can immediately be run and put on their device. Clever Coding will help the customer with getting the code up and running in their project. Also since Clever Coding's main business is developing client Apps the globe can be purchase as part of a package where Clever Coding develops the App from the ground up. Ad-hocs of the demo globe project are available on request to help potential customers decide if they are going to buy the source code. 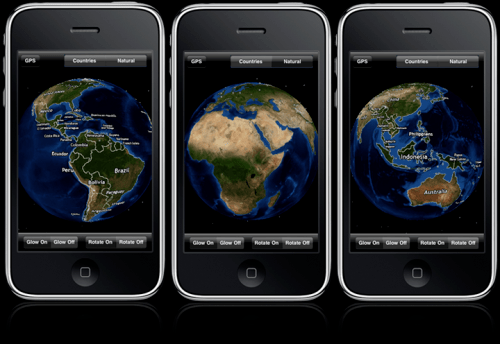