Apple has issued a formal apology after a group of black teens were refused entry into an Australian Apple Store. On Tuesday, a group of African teens tried to visit the Apple store at Highpoint shopping centre in Melbourne.

A video caught an Apple Store employee telling the teens to leave the store over concerns that they might steal.

"Guys, end of discussion, I need to ask you to leave our store."

"You might steal something." Apple store in Australia accused of racial profiling.
https://t.co/6CPBYme5DY

The teens returned to the store with Maribyrnong College principal Nick Scott the next day to seek an apology, meeting with a senior manager.

"She apologised to us and told us that we are welcome here anytime," Mabior Ater said. "It feels like we have justice now."

Apple has issued a statement on the matter:

“Inclusion and diversity are among Apple’s core values. We believe in equality for everyone, regardless of race, age, gender, gender identity, ethnicity, religion or sexual orientation. That applies throughout our company, around the world with no exceptions,” Apple said in a statement to BuzzFeed News.

“We’ve looked into the details of the situation and we apologise to the customers involved. We will continue to do everything in our power to ensure all our customers are treated the way they should be.”

I’m sure you are all aware of the unacceptable incident which took place at our store at the Highpoint shopping center in Melbourne, Australia, on Tuesday. Several young men, who are students at a nearby school, had been asked by a security guard to leave the store. In an attempt to address the situation, one of our store employees gave an answer which shocked many of us.

What people have seen and heard from watching the video on the web does not represent our values. It is not a message we would ever want to deliver to a customer or hear ourselves. Our employee immediately expressed his regret and apologized to the students.

None of us are happy with the way this was handled. But we can all be proud of Kate, one of the senior managers at the Highpoint store.

On Wednesday, she greeted the same group of students to express a heartfelt apology on behalf of our store and our company. She reassured these young men that they and their fellow classmates would always be welcome at our store. The school’s principal later told a reporter that she delivered her message “with good grace,” and one of the students said, “It feels like we have justice now.”

Her words that day echoed a message you’ve heard many times from me and from Angela. It’s a simple pledge we all make to our customers and to ourselves:

Our stores and our hearts are open to people from all walks of life, regardless of race or religion, gender or sexual orientation, age, disability, income, language or point of view. All across our company, being inclusive and embracing our differences makes our products better and our stores stronger.

The Apple Store Highpoint is staffed by people who share these values and illustrate our commitment to diversity. The team is made up of coworkers from Australia, as well as Egypt, Italy, India and five other nations. Collectively they speak 15 languages, including Urdu, Portuguese, Arabic and Mandarin.

While I firmly believe that this was an isolated incident rather than a symptom of a broader problem in our stores, we will use this moment as an opportunity to learn and grow. Our store leadership teams around the world, starting in Australia, will be refreshing their training on inclusion and customer engagement. These are concepts and practices they know well, but can always stand to reinforce.

Thank you all for your dedication to Apple, to our values, and to the customers we are so very fortunate to serve. 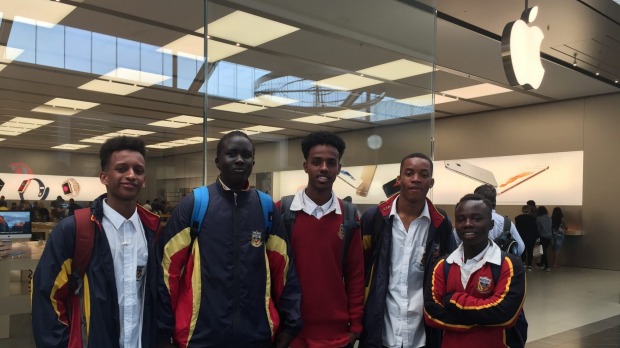 Araab - November 17, 2015 at 3:33pm
What's even more hilarious is while all these morons and racists who are ignorant themselves don't realize is they out on a show using the N word and degrading the whole black race if you met them in person and they were in public they wouldn't open their mouths and say this. Why because they wouldn't have the balls to. Unfortunately phone or internet thugs are usually the softest of the bunch cowards that think wow I can use all these hateful words and blast people because it's on a thread. Let me take you into the real world and the same losers which claim their boldness online wouldn't have nothing to say to a grown man. That I can guarantee tough internet trolls
Reply · Like · Mark as Spam

Araab - November 17, 2015 at 3:30pm
Lets face it nig ger lover is obviously mad and lonely. Guaranteed to jerk himself off every night. A troll that spends copious amount of time writing long posts into the abyss of some thread. He even responds and gives another rant or 2 so he checks to see if people responded to his comments which again is the mark of a sad person... Fortunately I read this thanked God I'm not that mad at the world or ignorant and wrote this. I'm sure I'll get responses but I'll be gone in the wind without the need to come check what was written so have a great time writing back you fuc kn troll while I go out with my girl for lunch never looking back at your pathetic rebuttal where you use ignorance as your focus.
Reply · Like · Mark as Spam

nogunssaveslives - November 17, 2015 at 2:46pm
Words cannot describe how horrible you are.
Reply · Like · Mark as Spam
51 More Comments
Recent