Apple has announced that adoption of iOS 9 has reached 67% as measured by the App Store on November 16th.

That adoption level is barely higher than the 66% measured on November 2, 2015.

Currently, 24% of users are still on iOS 8 and 9% are on earlier firmware versions. 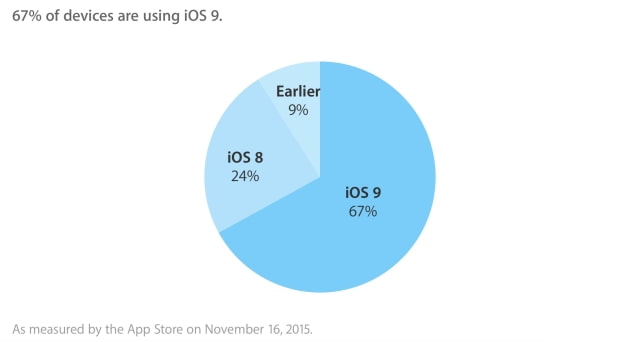 LOVEiOS - November 18, 2015 at 10:34am
Apple is really crushing Android when it comes to OS adoption! 75% of Android users are still running 2 years or older software. How sad! LoL
Reply · Like · Mark as Spam

loltwert - November 19, 2015 at 12:51pm
What a dumb answer, unlike iOS that has only like 1 Manufacturer eg Apple. Android has a lot of them eg Asus, LG, Motorola, Samsung, Sony, etc. that are competing with one another. By the least Android users can downgrade/upgrade whatever Android version they want from Official firmware or go to the extreme of installing Modded firmware aswell eg. Cyanogenmod, since Manufacturers tend to end support of providing latest firmware updates 2-3/4 years.
Reply · Like · Mark as Spam

Lolwart - November 19, 2015 at 1:15pm
Not near as dumb as yours. Who cares if people are able to downgrade. You know exactly what you're getting iOS updates, not to mention old iOS devices can run up to a certain version like where iPhone 4 is currently supporting, but the best part is how hardware and software work together when made by the same company when takes advantage of performance.
Reply · Like · Mark as Spam

loltwat - November 18, 2015 at 5:23am
this news is just stupid!... once you update you can never downgrade eitherway after signing ends so pretty much stuck with that firmware.
Reply · Like · Mark as Spam

Loltwit - November 18, 2015 at 5:34am
What's so stupid about it? Also, after about a week of a new update being out is when you really can't downgrade because that's around the time the older versions are signed off, but hey at least older apple products support older iOS versions except the first iPad is the only iPad to stay on old versions.
Reply · Like · Mark as Spam
2 More Comments
Recent