Apple just released iOS 9.2 for the iPhone, iPad, and iPod touch. Here's the full changelog for the new firmware version.

This update contains improvements and bug fixes including:
● Apple Music improvements
○ You can now create a new playlist when adding a song to a playlist
○ Your most recently changed playlist is now listed at the top when adding songs to playlists
○ Download albums or playlists from your iCloud Music Library by tapping the iCloud download button
○ See which songs have been downloaded with the new download indicator next to each song in My Music and Playlists
○ See works, composers, and performers while browsing Classical music in the Apple Music catalog
● A new Top Stories section in News so you can stay up to date with the most important news of the day (available in the United States, United Kingdom, and Australia)
● Mail Drop in Mail for sending large attachments
● iBooks now supports 3D Touch to peek and pop pages from the table of contents, your notes and bookmarks, or from search results inside a book
● iBooks now supports listening to an audiobook while you browse your library, read
other books, or explore the iBooks Store
● iPhone support for the USB Camera Adapter to import photos and videos
● Improved stability of Safari
● Improved stability of Podcasts
● Fixing an issue that caused mail attachments to be inaccessible for some users with POP email accounts
● Resolving an issue for some users that caused attachments to overlap text in mail
● Fixing an issue where Live Photos could have turned off after restoring from a previous iCloud backup
● Addressing an issue that could cause search in Contacts to display no results
● Resolving an issue that could have prevented Calendar from displaying all seven days in week
● Fixing an issue where Camera screen on iPad could be black when attempting to capture video
● Addressing an issue that could cause instability in the Activity app when viewing the day of Daylight Savings Time transition
● Fixing an issue that could prevent data from appearing in Health
● Fixing an issue that could prevent Wallet updates and Lock screen alerts from displaying
● Addressing an issue where updating iOS could prevent an alarm from going off
● Fixing an issue where some users were unable to login to Find my iPhone
● Fixing an issue that prevented some manual iCloud Backups from completing
● Addressing an issue where using the iPad keyboard could unintentionally trigger text selection mode
● Improved keyboard responsiveness when using Quick Reply
● Improved punctuation input on the 10-key Chinese {Pinyin & Stroke) keyboards with new expanded view of punctuation symbols and better predictions
● Fixing an issue on Cyrillic keyboards where caps lock would be enabled when typing in URL or email fields
● Accessibility improvements
○ Fixing issues with VoiceOver when using Camera face detection
○ Adding support for VoiceOver to wake up the screen
○ Adding support for VoiceOver to invoke app switcher with 3D Touch gesture
○ Fixing an issue with Guided Access when trying to end phone calls
○ Improved functionality for Switch Control users when using 3D Touch
○ Fixing an issue with speech rate of Speak Screen
● Siri support for Arabic (Saudi Arabia, United Arab Emirates) 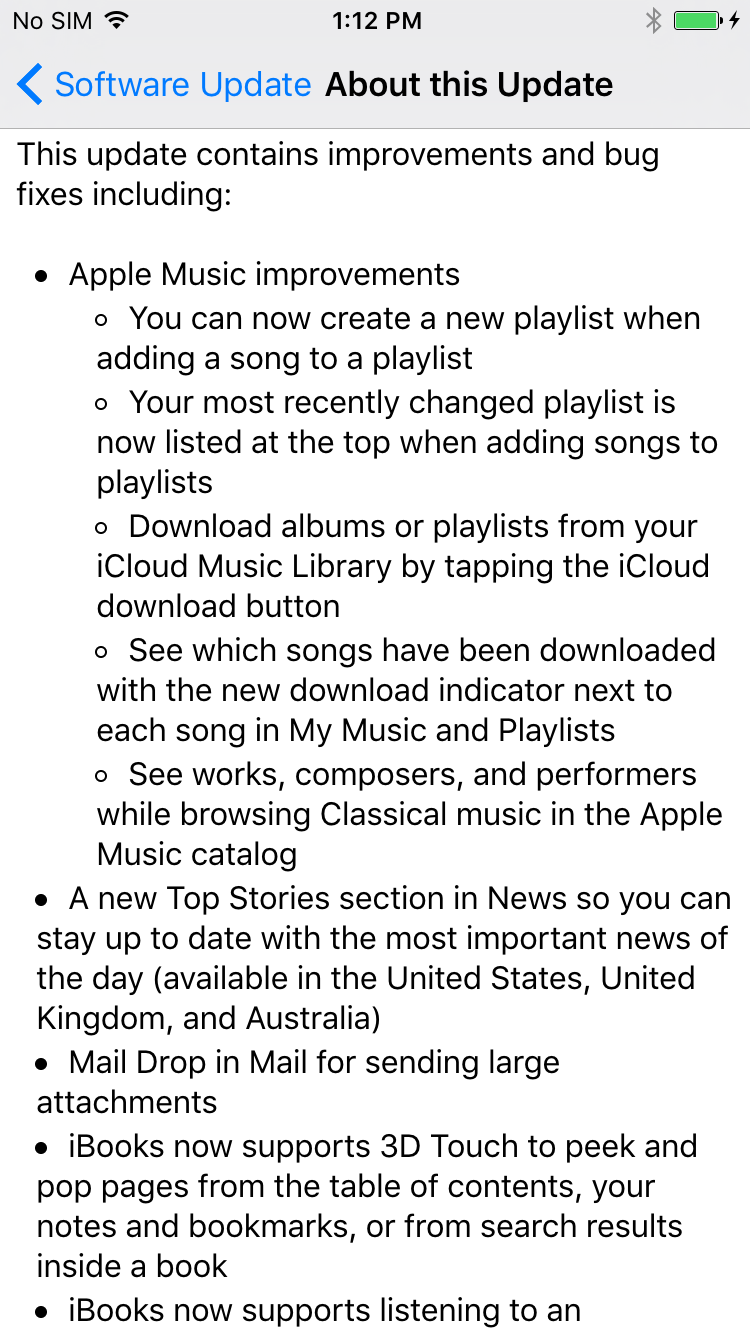 Khaled - December 10, 2015 at 7:11pm
I still cannot backup to cloud. This problem has not been fixed yet. Anyone has same problem too?
Reply · Like · Mark as Spam

Jack - December 9, 2015 at 7:04pm
On the whole I noticed performance improvements in 9.2. Less lags and more fluent animations on iPhone 6.
Reply · Like · Mark as Spam