A closeup photo allegedly of the packaging for the Apple's new 4-inch iPhone confirms it will be called the iPhone SE and will come in a 16GB variant. It also confirms that the device will have NFC support.

The new 4-inch iPhone is believed to feature a 12MP camera, an A9 chip, NFC, a similar form factor to the iPhone 5s, and slightly curved glass like the iPhone 6, 802.11ac Wi-Fi, Bluetooth 4.2, Live Photos support, a slightly larger 1642 mAh battery, and storage capacities of 16GB and 64GB. The device is not expected to have support for 3D Touch. 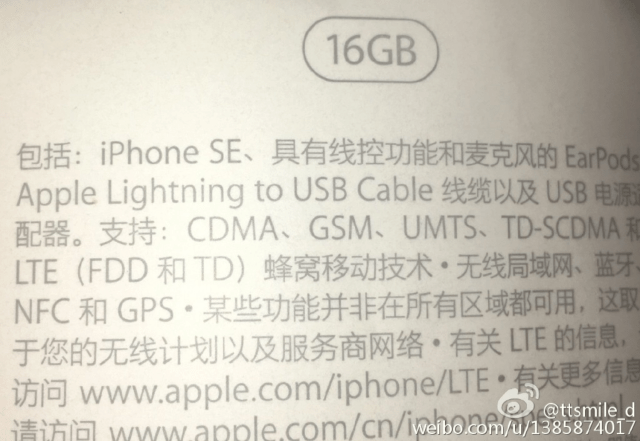 iPro Service - March 18, 2016 at 7:33am
Hopefully the new smaller yet still premium iPhone will also be available in 32GB. Had thought maybe iPhone 6se would be a more logical name and successor to the iPhone 5s. Was also expecting a repackaged 5s in a plastic shell called the iPhone 6c available in 8 and 16GB. That pair of releases, a budget conscious plastic shelled iPhone 6c and premium built but 4" iPhone 6se would have made more sense to us and filled the gaps nicely.
Reply · Like · Mark as Spam

odedo1 - March 17, 2016 at 4:25pm
But going back from the 6S with 3D touch is not possible any more, Apple made a big mistake unless they plane on selling this phone in India for a very low price.
Reply · Like · Mark as Spam