Billionaire investor Carl Icahn has sold his entire position in Apple's stock as it continues to lose value following disappointing earnings, reports CNBC. Icahn owned a little under a percent of AAPL shares.

"We no longer have a position in Apple," Icahn told CNBC's "Power Lunch," noting Apple is a "great company" and CEO Tim Cook is "doing a great job."

Apple's stock is down about 3% today after falling 6% on Wednesday. The company reported its first down quarter in 13 years on Tuesday. 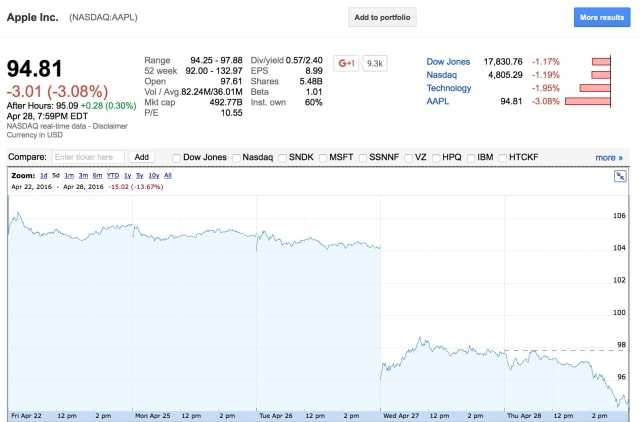 Notably, Icahn says it's concerns about China, not the stock's price that prompted his exit.

"You worry a little bit — and maybe more than a little — about China's attitude," Icahn said. He added that China's government could "come in and make it very difficult for Apple to sell there ... you can do pretty much what you want there."

"We remain very optimistic about the China market over the long term, and we are committed to investing there for the long run," Apple CFO Luca Maestri said Tuesday.

Picky Pick - April 30, 2016 at 12:49am
Then e plain why people say the iPad nowadays are great and as good as it gets compared to when it first appreared! Not to mention iPhone sales that go beyond the ones Jobs came out with. Not to say he lacked any, it's that Tim continued his efforts and hired him because he thought he was one of the greatest people to work at Apple, and not to mention he still appears on Time Magazines as one of the hundreds of influential people meaning that Tim Cook knows what he is doing that he steps up!
Reply · Like · Mark as Spam
3 More Comments
Recent