Gross margin was 39.4 percent compared to 40.8 percent in the year-ago quarter. International sales accounted for 67 percent of the quarter’s revenue.

“Our team executed extremely well in the face of strong macroeconomic headwinds,” said Tim Cook, Apple’s CEO. “We are very happy with the continued strong growth in revenue from Services, thanks to the incredible strength of the Apple ecosystem and our growing base of over one billion active devices.”

The Company also announced that its Board of Directors has authorized an increase of $50 billion to the Company’s program to return capital to shareholders. Under the expanded program, Apple plans to spend a cumulative total of $250 billion of cash by the end of March 2018.

“We generated strong operating cash flow of $11.6 billion and returned $10 billion to shareholders through our capital return program during the March quarter,” said Luca Maestri, Apple’s CFO. “Thanks to the strength of our business results, we are happy to be announcing today a further increase of the program to $250 billion.”

As part of the updated program, the Board has increased its share repurchase authorization to $175 billion from the $140 billion level announced last year. The Company also expects to continue to net-share-settle vesting restricted stock units.

The Board has approved an increase of 10 percent to the Company’s quarterly dividend, and has declared a dividend of $.57 per share, payable on May 12, 2016 to shareholders of record as of the close of business on May 9, 2016.

From the inception of its capital return program in August 2012 through March 2016, Apple has returned over $163 billion to shareholders, including $117 billion in share repurchases.

The Company plans to continue to access the domestic and international debt markets to assist in funding the program. The management team and the Board will continue to review each element of the capital return program regularly and plan to provide an update on the program on an annual basis.

Apple is providing the following guidance for its fiscal 2016 third quarter:
● revenue between $41 billion and $43 billion
● gross margin between 37.5 percent and 38 percent
● operating expenses between $6 billion and $6.1 billion
● other income/(expense) of $300 million
● tax rate of 25.5 percent

Apple will provide live streaming of its Q2 2016 financial results conference call beginning at 2:00 p.m. PDT on April 26, 2016 at www.apple.com/investor/earnings-call/. 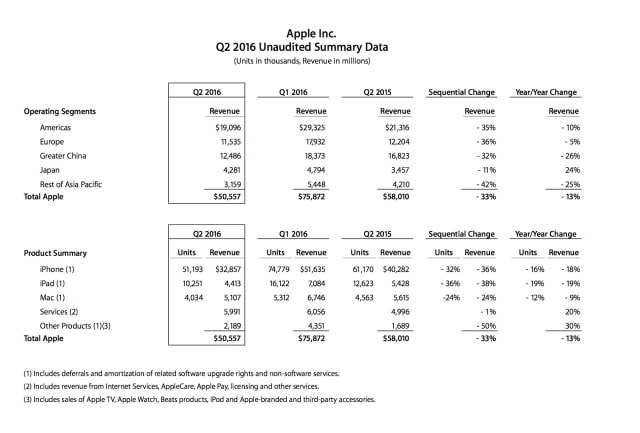 Sabtain Aziz - April 27, 2016 at 2:54pm
Look I'm no fan boy but apple doesn't put things in their phones we don't need I mean look at octa core processors phones barely use dual fully; Apple is still a innovative company ok not at the speed it used to but in a maturing market it's still doing well tablet markets been declining for years yet only last year or so iPad started selling less. The pc markets been going down for many many years yet macs are still growing compared to standard PCs and smart phone markets been on the decline for 2 years yet only this year iPhone sales declined. Smart watch wise Apple made 6 billion that's more than Rolex!. Company's still copy Apple with things like Touch ID, force touch even the rumoured features for the next iPhone have been copied by a major Chinese manufacturer. I still think Apple is innovative
Reply · Like · Mark as Spam

Mr. Trash - April 27, 2016 at 12:20am
iclarified is going down too, nobody wants to comment or read lies about stupidity as apple crap. delete me
Reply · Like · Mark as Spam

Mr. Recycled - April 27, 2016 at 1:01am
The only thing going down are brain cells just from reading your laughably bad attempt to claim shit!
Reply · Like · Mark as Spam