Apple has informed the Imagination Technologies that in 15 months to 2 years it will no longer use the company's intellectual property for its GPUs. Rather, as previously reported, the company is building its own GPU.

Imagination Technologies claims it would be 'extremely challenging to design a brand new GPU architecture' without infringing on its intellectual property. It's requested evidence to substantiate Apple's assertion; however, as expected, Apple isn't sharing any details.

Here's the full announcement made by Imagination Technologies.

---
Imagination Technologies Group plc (LSE: IMG, “Imagination”, “the Group”) a leading multimedia, processor and communications technology company, has been notified by Apple Inc. (“Apple”), its largest customer, that Apple is of a view that it will no longer use the Group’s intellectual property in its new products in 15 months to two years time, and as such will not be eligible for royalty payments under the current license and royalty agreement.

Apple has used Imagination’s technology and intellectual property for many years. It has formed the basis of Graphics Processor Units (“GPUs”) in Apple’s phones, tablets, iPods, TVs and watches. Apple has asserted that it has been working on a separate, independent graphics design in order to control its products and will be reducing its future reliance on Imagination’s technology.

Apple has not presented any evidence to substantiate its assertion that it will no longer require Imagination’s technology, without violating Imagination’s patents, intellectual property and confidential information. This evidence has been requested by Imagination but Apple has declined to provide it.

Further, Imagination believes that it would be extremely challenging to design a brand new GPU architecture from basics without infringing its intellectual property rights, accordingly Imagination does not accept Apple’s assertions.

Apple’s notification has led Imagination to discuss with Apple potential alternative commercial arrangements for the current license and royalty agreement.

Imagination has reserved all its rights in respect of Apple’s unauthorised use of Imagination’s confidential information and Imagination’s intellectual property rights.

A further announcement will be made in due course.
--- 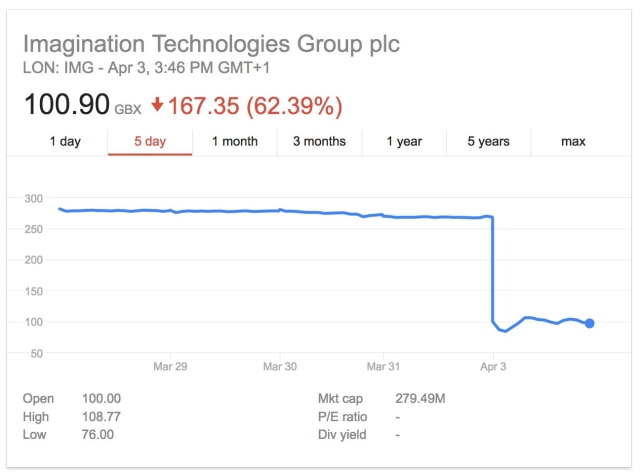 Great! - April 4, 2017 at 4:56am
After Imagination Technologies shares drop to a low, Apple will buy majority shares and take over the company.
Reply · Like · Mark as Spam

Wolf of Coke Street - April 4, 2017 at 6:42am
I'm counting on it. I just bought all the shares I could get my hands on. People are panicking, this is just nuts.
Reply · Like · Mark as Spam
Recent