“We are proud to report a strong March quarter, with revenue growth accelerating from the December quarter and continued robust demand for iPhone 7 Plus,” said Tim Cook, Apple’s CEO. “We’ve seen great customer response to both models of the new iPhone 7 (PRODUCT)RED Special Edition and we’re thrilled with the strong momentum of our Services business, with our highest revenue ever for a 13-week quarter. Looking ahead, we are excited to welcome attendees from around the world to our annual Worldwide Developers Conference next month in San Jose.”

Apple also announced that its Board of Directors has authorized an increase of $50 billion to the Company’s program to return capital to shareholders and is extending the program timeframe by four quarters. Under the expanded program, Apple plans to spend a cumulative total of $300 billion by the end of March 2019.

“We generated strong operating cash flow of $12.5 billion and returned over $10 billion to our investors in the March quarter,” said Luca Maestri, Apple’s CFO. “Given the strength of our business and our confidence in our future, we are happy to announce another $50 billion increase to our capital return program today.”

As part of the latest update to the program, the Board has increased its share repurchase authorization to $210 billion from the $175 billion level announced a year ago. The Company also expects to continue to net-share-settle vesting restricted stock units.

The Board has approved a 10.5% increase to the Company’s quarterly dividend, and has declared a dividend of $0.63 per share of the Company’s common stock, payable on May 18, 2017 to shareholders of record as of the close of business on May 15, 2017.

From the inception of its capital return program in August 2012 through March 2017, Apple has returned over $211 billion to shareholders, including $151 billion in share repurchases.

The Company plans to continue to access the domestic and international debt markets to assist in funding the program. The management team and the Board will continue to review each element of the capital return program regularly and plan to provide an update on the program on an annual basis.

Apple will provide live streaming of its Q2 2017 financial results conference call beginning at 2:00 p.m. PDT on May 2, 2017 at www.apple.com/investor/earnings-call/ for those who want to tune in. 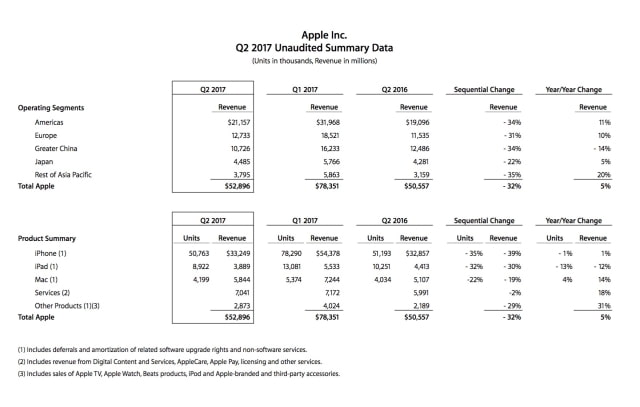