Spotify has announced a 'WhoWeBe' live music event in the U.K. featuring artists from the country's #1 Hip Hop & Grime playlist. The concert will be held November 30th, 2017 at the Alexandra Palace.

The event comes just after Apple confirmed it will be canceling its popular music festival in the U.K. after 10 years.

Here's the lineup for WhoWebe:

● Cardi B
Hailing from the Bronx, New York, Cardi B made her musical debut alongside Popcaan on Shaggy's "Boom Boom" single. Early in 2017 she signed with Atlantic Records, following the success of her mixtape series “Gangsta Bitch Music” and solo singles “Cheap Ass Weave,” “Foreva” and “Wash Poppin’”. Her single “Bodak Yellow” dropped in June 2017 and has since racked up 52 million streams on Spotify.

● Dizzee Rascal
Since his Mercury Prize winning debut, “Boy In Da Corner,” Dizzee has released five albums including the platinum selling “Tongue ‘N’ Cheek”. Dizzee’s solo work has clocked up almost 200 million streams on Spotify and his sixth studio album, “Raskit”, released this summer, sees him return to the hardcore sound of his early work.

● J Hus
J Hus exploded onto the scene with his mixtape “The 15th Day” which had over one million plays in its first month alone. 2017 saw him release his debut LP, “Common Sense", later recognised with a Mercury Prize nomination. He’s racked up over 150 million streams on Spotify with tracks including “Did You See” and “Lean & Bop” and featured on Stormzy’s "Bad Boys".

● Stefflon Don
Stefflon Don was raised in Birmingham, the Netherlands and East London. She started making waves with covers of Wretch 32 and Section Boyz, leading to collaborations with the likes of Lethal Bizzle, Sneakbo, Jeremih and Wretch 32. 2016 saw the release of her debut mixtape, “Real Ting” and by mid 2017 she had signed to Universal Music and released the single “Hurtin’ Me” featuring French Montana.

Tickets will be available starting 10am, September 11th from Alexandra Palace, GigsAndTours, and Ticketmaster. 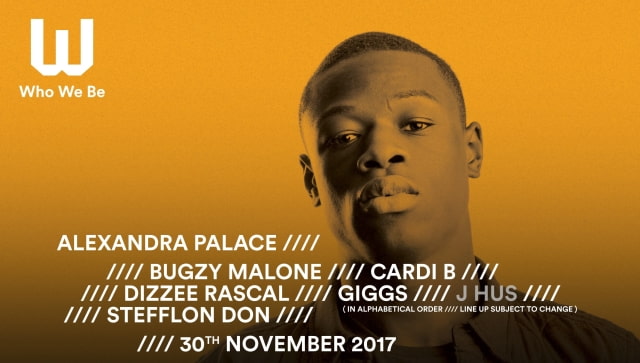