The Company posted quarterly revenue of $52.6 billion, an increase of 12 percent from the year-ago quarter, and quarterly earnings per diluted share of $2.07, up 24 percent. International sales accounted for 62 percent of the quarter’s revenue.

“We’re happy to report a very strong finish to a great fiscal 2017, with record fourth quarter revenue, year-over-year growth for all our product categories, and our best quarter ever for Services,” said Tim Cook, Apple’s CEO. “With fantastic new products including iPhone 8 and iPhone 8 Plus, Apple Watch Series 3, and Apple TV 4K joining our product lineup, we’re looking forward to a great holiday season, and with the launch of iPhone X getting underway right now, we couldn’t be more excited as we begin to deliver our vision for the future with this stunning device.”

Apple’s board of directors has declared a cash dividend of $0.63 per share of the Company’s common stock. The dividend is payable on November 16, 2017 to shareholders of record as of the close of business on November 13, 2017. 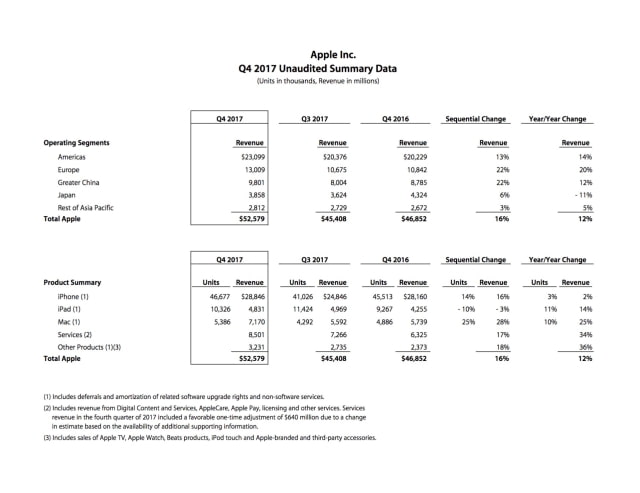