Check out these beautiful concepts images of a 'MacBook Touch' by handy-abovergleich.ch. The concept features two large OLED displays, one of which virtually displays the entire keyboard.

Experts and insiders agree: Apple's iPhone X was just the beginning of a new era for Apple products. As Apple's current patents suggest, the Mac and the MacBook will be one of the next products that Apple redesigned fundamentally. Therefore, based on current rumors, official patent applications and expert opinions, we have designed an extremely elaborate concept of Next Generation MacBook Pro. It should give us a good idea of ​​what we can expect from Apple soon. 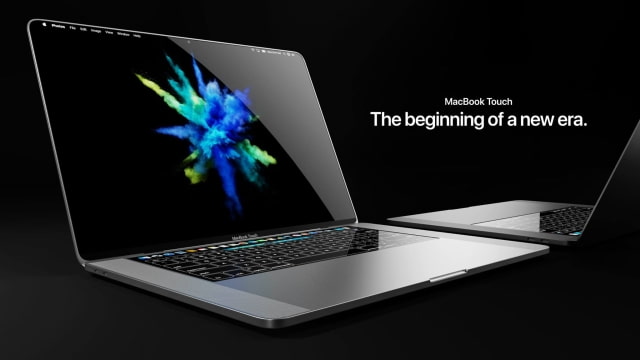 Highlights:
● Beautiful in Every Dimension
The almost bezel-less Super Retina Display in the MacBook Touch sets a new standard, even for MacBook screens. On the ultra sharp OLED display, you can now see details, you have never seen before. At the top of the screen is what we call the navigation bar. This OLED stripe not only features all kind of icons and information, it also houses the Full HD FaceTime camera as well as the TrueDepth camera, you know and love from your iPhone X. With Face ID coming to the MacBook Touch it's now easier then ever to unlock your device, authenticate in Safari or make payments via Apple Pay.

● More possibilities. More freedom.
With MacBook Touch we are introducing the all new 3D Touch Keyboard It takes the great user experience of MacBooks to the next level. We are also bringing the Apple Pencil to the Mac with a seamless support for the 3D Touch Keyboard. Being able to customize your keyboard and using the touch screen. And with the even larger Force Touch trackpad, you have more space than ever for gestures and clicks.

● Create more. Create differently.
With Apple Pencil finally coming to the MacBook, you not only can create more, but do so in a way that has not been possible before. lt is the best tool to reach for, when you want to be creative. With amazing apps designed to take full advantage of its distinctive features. Apple Pencil offers unmatched accuracy and extremely low latency. And it can be used for pretty much everything: Use it for your notes and drafts or to paint images. You can use it as a text marker and even to sign a document. The possibilities are limitless.

Take a look at the image below and hit the link for more. Let us know what you think of the concept in the comments! 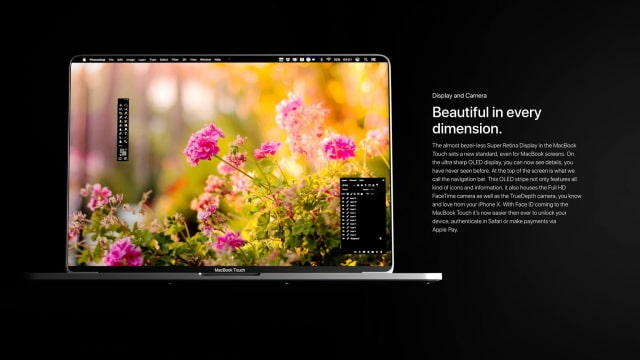 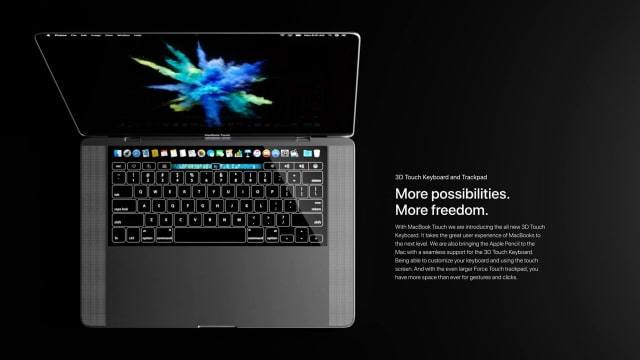 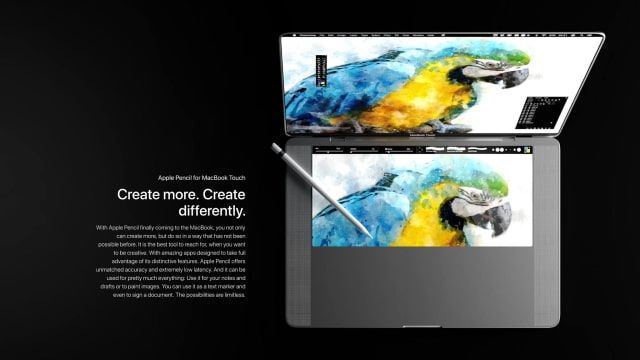 Manuel Rivera-Ortiz - December 25, 2017 at 12:52am
Funny some of these comments sound like what they said about QWERTY keyboard dissapearance from phones, loss of 30-pin connectors, loss of Disc drives, so much more!!!
Reply · Like · Mark as Spam

Tony - December 24, 2017 at 10:20am
3D is not as the same as physical touch and that's the main problem to do typing because you can't feel it on the tips of your fingers. Such design is nice bit fail to human responses.
Reply · Like · Mark as Spam

D4xM4Nx - December 23, 2017 at 11:22am
Now this is what I call some stupid shit anyone can do to a Mac... Concept MFs may need to actually start thinking before they want to ditch the standard keyboard lol.
Reply · Like · Mark as Spam
3 More Comments
Recent