Apple maintained a solid lead in the worldwide tablet market in 4Q17, according to the latest IDC report. Shipments of slate tablets reached 43.1 million units during the fourth quarter of 2017, and 141.7 million during the year. That's down 7.6% from the previous year. Notably, the worldwide detachable tablet market grew to 6.5 million units in the fourth quarter of 2017, an increase of 10.3% from the previous holiday season

---
Tablet Company Highlights
Apple maintained a solid lead in the holiday quarter driving growth both through its lower-priced 9.7-inch iPad as well as its newly refreshed iPad Pro products. While the lower-price iPad has continued to drive a strong consumer upgrade cycle, the shifting focus is to iPad Pro and its potential in the commercial and education segments. With the only expected tablet growth to come from these segments, Apple's recent launch of "Apple at Work" shows their commitment to maintain its leader position.

Amazon.com was able to steal the second position from rival Samsung as the online giant offered steep discounts during the holiday season. The low-cost tablets have been quite effective as shopping catalogs for Amazon's online storefront and in recent quarters the company has taken things a step further by including its voice assistant, Alexa, in the latest tablets and by expanding to new markets around the world.

Samsung dropped to the third position behind Amazon. Shipments of its detachable portfolio continue to rise, however these gains are outweighed by the declines seen among its slate models. As its lower-cost Tab A and E series is challenged by vendors promising better value, Samsung will face a particular challenge in upgrading its base to both a higher-priced and detachable device.

Huawei's half-hearted approach to the growing detachable segment does not offer a promising outlook for the company. However, the company's strong brand, aggressive channel strategy, and inclusion of cellular connectivity in its slate tablets has helped cement its rank in the top 5.

Lenovo's ability to leverage its strength from the traditional PC business is starting to pay off as the company's detachable tablet business has grown in the past year. However, the bulk of Lenovo's tablets are still comprised of slates that offer great value at low prices.
--- 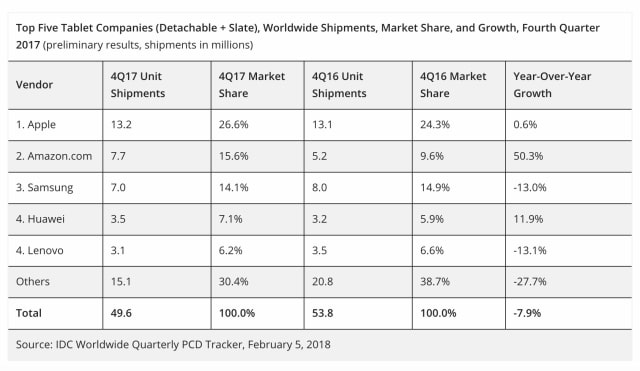