Vendors shipped 26.8 million traditional slate tablets, down 13.9% from last year; however, detachable tablets like the Microsoft Surface and iPad Pro experienced 2.9% year over year growth, capturing 15.3% of the market.

"Chrome OS' entrance in the detachable market is a welcome change as Google is finally a serious contender from a platform perspective," said Jitesh Ubrani, senior research analyst with IDC's Worldwide Quarterly Mobile Device Trackers. "Google's tighter control and integration of Chrome OS will allow brands to focus more on hardware design and additional services rather than spending resources reconfiguring Android to work in a detachable setting. Combined with Microsoft's efforts to run Windows on ARM, the detachable market is poised for strong growth in the near term."

"The timing of Chrome OS' official entry into the tablet category is apt," stated Linn Huang, research director, Devices and Displays. "Peak education buying season is approaching, and Chrome OS has resonated with administrators for its manageability where deployment is strong. Schools looking for that same environment but in tablet form – generally students aren't provisioned a device with a keyboard until older – could find favor with these new devices."

Tablet Company Highlights
● Apple's leading position remained unchallenged during the quarter as the company managed to ship 9.1 million iPads. Of that, 1.8 million were iPad Pro tablets, making Apple the leader in the detachable market as well. Apple's latest iPad launched towards the end of the quarter and along with the company's renewed focus on the education market should prove to be quite lucrative in the coming quarters.

● Samsung maintained the second position although the company's shipments declined 11.4% compared to last year. Samsung is one of the few remaining brands to offer premium Android tablets with its Tab S lineup. However, barring any significant changes, maintaining its position in the premium space may prove challenging as detachables based on the Apple, Microsoft, and even Google Chrome platforms pick up steam. Towards the end of the quarter, Samsung announced a new enterprise focused tablet, the Tab Active 2, and while this is a niche market, it tends to be one with high margins.

● Huawei grew 13% year over year, gained more than 2% of share sequentially, and climbed back into the ranks of the top 3. Huawei is still geographically anchored in Asia/Pacific (excluding Japan) – 49.5% of their shipments went to this region – but it saw tremendous growth particularly in Europe where its volumes grew 72.7% against the backdrop of a 8.7% total market decline.

● Lenovo managed to grow 1.8% compared to the past year with most of the growth stemming from its detachable portfolio as the company shipped over two hundred thousand detachables. The company's strong presence in Asia and Europe has helped cement its position amongst the top 5 and helped differentiate it from close competitors like Huawei.

● Amazon.com slipped into fifth place though this does not come as a surprise as the company's tablet shipments are highly seasonal. Moreover, during the first quarter, the company was far more focused on enhancing the Alexa platform and even announced availability of its voice assistant on the smaller 7- and 8-inch Fire tablets.

Check out the chart or hit the link below for more details... 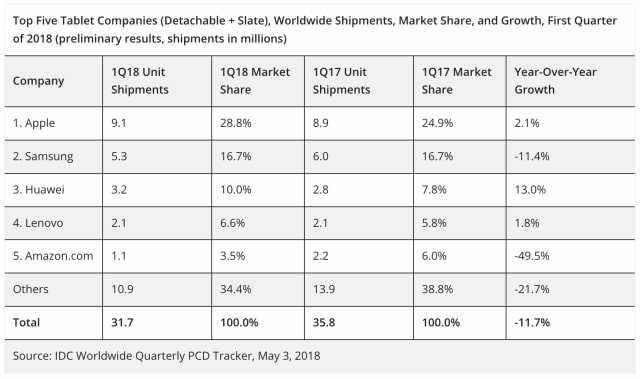