It looks to be an exciting year for the company as updates to nearly all of its product lines are predicted.

● iPhone - Apple is expected to debut three new iPhones this September including a 5.8-inch OLED iPhone, a 6.1-inch LCD iPhone, and a 6.5-inch OLED iPhone. All three are said to feature a new A12 processor and Face ID. Only the OLED models will feature a dual-lens camera.

● iPad - Two new 11-inch and 12.9-inch iPad Pro models are expected this year. They will likely feature a similar design to the iPhone X with a larger screen and no Home button. Apple is expected to equip the iPad Pro with Face ID in place of Touch ID.

● MacBook - Kuo reports that Apple is designing a new lower priced notebook. It's unclear if this will be a new MacBook Air or a MacBook but rumors have suggested it will have a 12-inch display. Apple is also expected to update its MacBook and MacBook Pro models with better processors.

● Mac - A refresh of the nearly abandoned Mac mini is coming, reports Kuo. However, besides a processor bump, it's unclear if there will be any major changes to the device. The iMac will reportedly get a processor update as well, in addition to a significant display performance upgrade.

● AirPods - Apple is expected to launch updated AirPods as well as the previously announced AirPower charging mat later this fall.

It's likely that we could see many of these products announced at Apple's September iPhone event; however, it's possible that some of them could be held back for a second event in October. 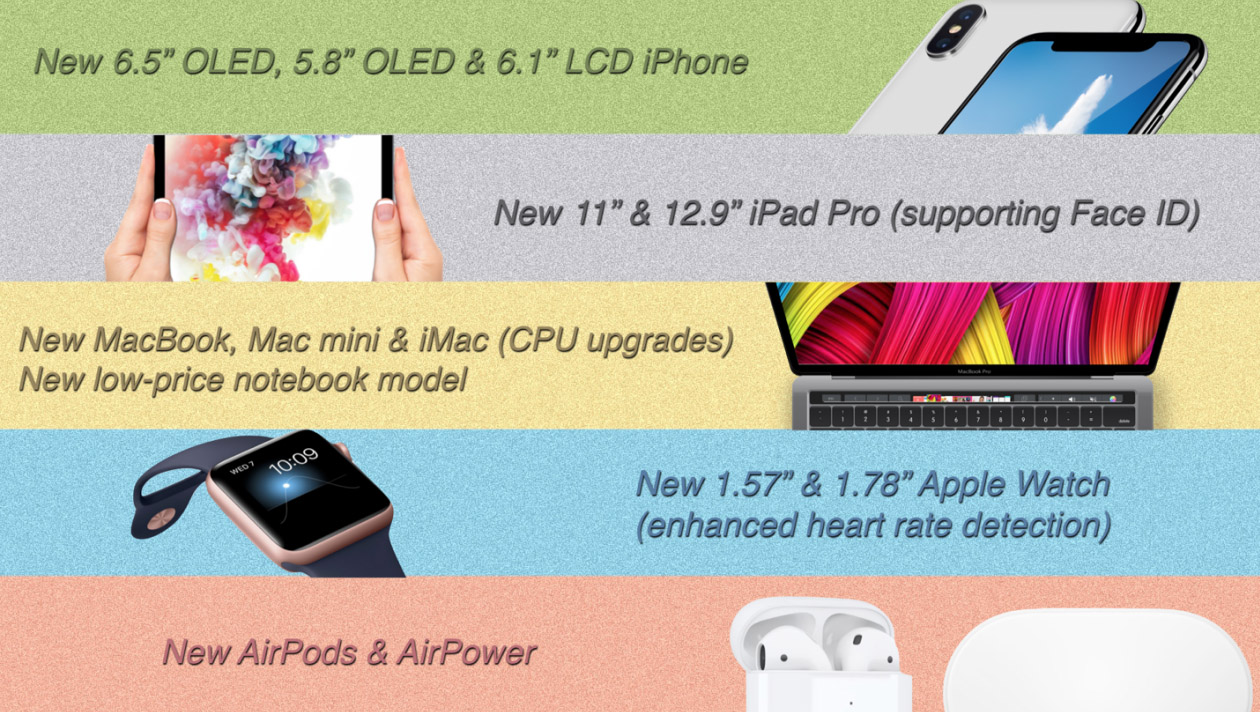 nocci - July 11, 2018 at 6:32pm
I know I mentioned this before, but if they do reveal the MacBook Air for its tenth anniversary, then I hope they can hold off until some time around November for Black Friday because I got a new job after three years of being able to get one because I had to share a car and reasons as to why I say wait this long because I want a specifically configured model and not some scuffed used one with worn out processors and the monthly rent my family has set up balancing out how much I make per month, but I have been dying to own one for years it what I'm saying here.
Reply · Like · Mark as Spam