The Apple Watch Series 1 was the most popular smartwatch model in the second quarter of 2018, according to Counterpoint Research. Surprisingly, customers are choosing the older model over the newer Series 3 without cellular.

Apple users are choosing Series 3 preferably if they want to add cellular connectivity, else Series 1 remains the most popular model contributing to almost nine out of ten Apple Watch sold in Q2 2018. While this is great for Apple from an ecosystem perspective, from an ASP perspective it is not the same bump as Apple would expect with newer iPhone models every year.

"Back in Q4 2017, Apple stepped up its strategy in the smartwatch segment by enhancing the features of smartwatches into broad-based functionalities, including some health and fitness tracking capabilities," says Counterpoint Research Analyst, Satyajit Sinha. "Moreover, Apple is catalysing the trend of 'smartwatch as a standalone wearable device' with adoption of cellular connectivity, which is driving the new wave of cellular connected wearables globally, great news for mobile operators." 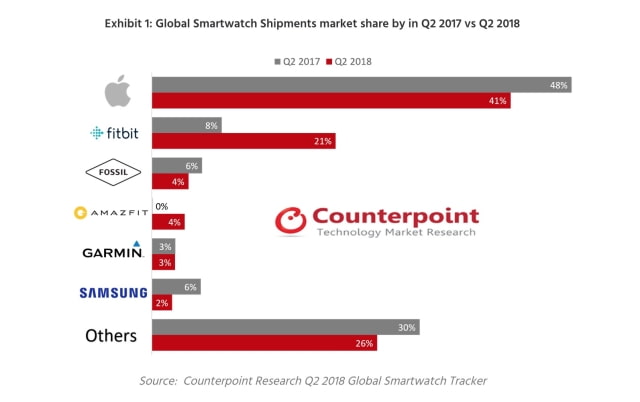 Highlights by Brand:
The Smartwatch market is dominated by the top six brands contributing to 74% of the volume shipments:

● Apple’s quarterly shipments declined 20% quarterly in Q2 2018 due to seasonality. However, it grew 17% YoY as uptick for Apple Watch has been rising compared to a year ago.
● Fitbit’s share in smartwatch shipments grew exponentially, majorly due to the huge success of Versa which was released in in April 2018. Its market share increased from 8% in Q2 2017 to 21% in Q2 2018.
● Amazfit is a sub-brand of a Chinese OEM Huami, which is a manufacturer of wearable products for Xiaomi. It currently holds 4% market share in Q2 2018 and jumped into the top five rankings globally. Its established sales channels and brand awareness of Mi smartphones and bands will drive the home advantage for the Amazfit brand.
● Garmin shipments grew 35% YoY and holds 3% market share. Launch of Vívoactive 3 music and Fenix 5 Plus series of watches with built-in maps, Garmin Paymobile payments, music storage are key features that are attracting consumer interest. Moreover, the inclusion of Pulse Ox sensor technology for blood oxygen saturation awareness on the Fenix 5X Plus, just after FDA approval on 16th March 2018, are one of the unique features in the market to compete with Apple and Fitbit and it will lead to a significant growth in Garmin shipments by the end of 2018.
● Samsung smartwatch shipments declined 17% QoQ and 43% YoY. The major concern for Samsung is the limited refresh rate on its portfolio along with premium prices. However, Samsung launched its Gear S4 in Aug 2018, which will increase its shipments in Q3 2018.
● Fossil shipments remained flat YoY in the smartwatch segment. However, the Fossil Q Venture, the Fossil Q Explorist and its key strategic partnership with Google to dominate Fashion-First Smartwatches will sustain its growth as it continues to shift its watch segment into the smartwatch segment.
● Proprietary OS grew 76% YoY majorly due to Fitbit, Amazfit and other white label models.
● iOS shipments grew 17% YoY and Wear OS shipments grew 24% YoY. However, iOS market share declined from 48% to 41% YoY whereas Wear OS market share declined from 8% to 7% YoY.

Note:
Check out the new Apple Watch being announced next week! 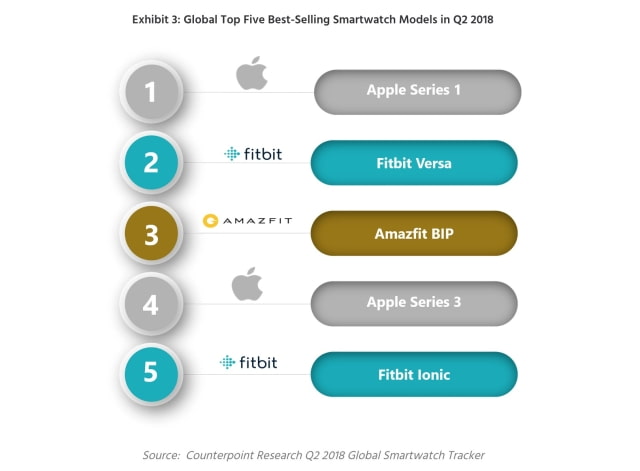 ichild - September 3, 2018 at 11:57am
The apple watch is indeed overpriced simply cause off the walls of life apple wants money from. All this could of been solved simply buy making one dam good watch and let people decide if they want to buy it or not. Even though all the insides of the watch are the same the quality of the case is what makes the watch last longer over a longer time frame. Why pay 1200 bucks for a 250-300 device. Simply a sham but if people like to give there money away that easy. Then yes apple take it by all means.
Reply · Like · Mark as Spam