Starting at just $329, the new iPad brings more screen area and support for the full-sized Smart Keyboard,2 as well as a new iPad experience with iPadOS. The upgrade packs even more value into the most popular and affordable iPad, featuring a stunning 10.2-inch Retina display and the latest innovations including Apple Pencil3 support, the fast A10 Fusion chip, advanced cameras and sensors, unmatched portability and connectivity, ease of use and great all-day battery life.4 iPadOS is available today as a free software update for iPad Air 2 and later, all iPad Pro models, iPad 5th generation and later and iPad mini 4 and later.

Bigger Display in a Powerful and Portable Design
The new 10.2-inch Retina display iPad has nearly 3.5 million pixels and a wide viewing angle making it a vivid canvas for creative expression and perfect for immersive augmented reality (AR) experiences that take advantage of its enhanced cameras and advanced sensors. Featuring the powerful A10 Fusion chip, the new seventh-generation iPad brings up to two times faster performance over the top-selling Windows PC5 for powerful multitasking and smooth gameplay in Apple Arcade.

Designed to be ultra-portable and durable, iPad weighs about one pound and for the first time features an enclosure made from 100 percent recycled aluminum with the same strength, durability and beautiful finish as the aluminum in all Apple products.6 Staying connected is easy on iPad with ultra-fast wireless performance and support for Gigabit-class LTE connectivity — delivering three times faster7 cellular data connections.8 With Touch ID, unlocking iPad is simple and secure using just a finger, to keep important information safe.

Pricing and Availability
● The new seventh-generation iPad comes in silver, space gray and gold finishes in 32GB and 128GB configurations. iPad starts at $329 (US) for the Wi-Fi model and $459 (US) for the Wi-Fi + Cellular model from apple.com, in the Apple Store app and Apple Stores, and is also available through Apple Authorized Resellers and select carriers (prices may vary).
● The new iPad is available to order from apple.com and in the Apple Store app in the US and more than 25 other countries and regions. iPad will start shipping on Wednesday, September 25 and be available in stores beginning later this week (varies by country and region).
● iPadOS ships for free with the new seventh-generation iPad and is available as a free software update for iPad Air 2 and later, all iPad Pro models, iPad 5th generation and later, and iPad mini 4 and later.
● Apple Pencil (1st generation) is available for purchase separately for $99 (US).
● The Smart Keyboard is a full-size keyboard that connects to the 10.2-inch iPad with the Smart Connector. It is available for purchase separately for $159 (US) with layouts for over 30 languages, including simplified Chinese, French, German, Japanese and Spanish.
● Schools can purchase iPad starting at $299 (US) and Apple Pencil for $89 (US).
● Polyurethane Smart Covers are available for $39 (US) for iPad in charcoal gray, white, pink sand and a new Alaskan blue.

Notably, Amazon is already offering $29 off the 128GB Wi-Fi version. 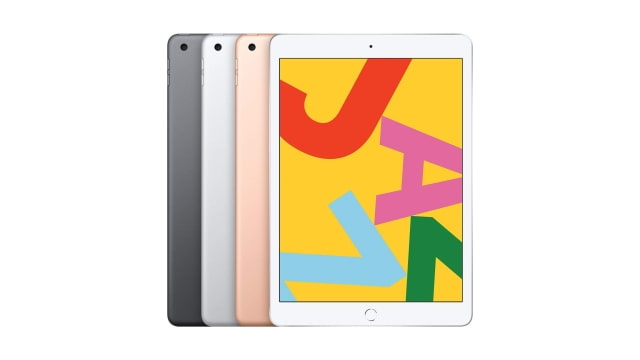