The new app removes the Alexa tab and instead offers a large Alexa button at the top of the Home tab. Under the button users are informed that they can tap the button to invoke the personal assistant or just say "Alexa".

Third party skill suggestions have been moved off the main screen and users are now offered a list of personalized suggestions based on usage. You may also see controls for features and devices that are currently active. For example, volume control for an Echo device that's playing music.

Before, the app had featured the date and weather at the top of the screen — an indication that Amazon had hoped the app would be something of a daily dashboard. Now, the company seems to understand that users will launch the app when they want to do something Alexa-specific. That’s why it’s making it easier to get to recent actions, so they can effectively pick up where they left off on whatever they were doing on their Echo smart speaker, for example.

Notably, the Alexa tab has been replaced with a play tab for quick access to media playback and advanced app features like Reminders, Routines, Skills, and Settings have been relocated under the 'More' tab.

The update is being rolled out worldwide over the next month on iOS, Android, and FireOS. You can download the Alexa app from the App Store for free at the link below. 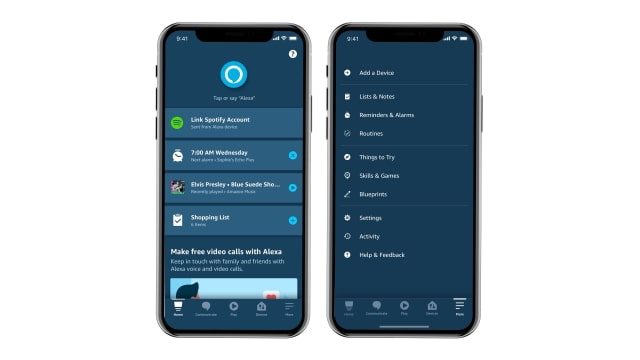