Verizon has a 4G LTE network and a millimeter-wave "ultra wideband" (UWB) 5G network. The UWB network has very limited coverage at this point in time so the company introduced a "nationwide 5G" network based on dynamic spectrum sharing. DSS reuses parts of 4G channels for 5G, giving customers that coveted 5G icon.

"For most customers, performance on our 5G nationwide network will be similar to 4G. [DSS] is new technology and we're continuing to modify it as we go. We expect performance improvement through 2021 and beyond," a Verizon spokesperson said.

In our most recent tests, we found that DSS 5G is seriously holding back both iPhones and Android phones. We compared a OnePlus 8 using DSS 5G with a Samsung Galaxy S20 FE on 4G, and we then ran tests on an iPhone 12 Pro toggling between 5G and 4G at the same locations. In both cases, DSS 5G turned in worse results than 4G LTE.

Additionally, the site found that in most cases latency was also lower on Verizon's 4G LTE.

For now, it appears as though Verizon customers should turn off 5G in non-UWB areas until the network improves performance. More details in the full report linked below... 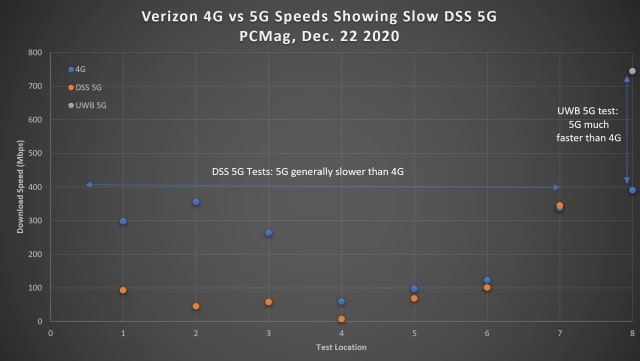 NoGoodNick - December 24, 2020 at 3:12pm
Apple users are used to paying more, but you expect to get a better quality product. This is nothing more than a shell-game slight of hand, where you pay for 5G-access, only to get 3G service. Guess it’s time to start demanding full refunds. The only remaining competitor has a much worse 5G product, only slightly better then 4G, but at least you know what you’re getting. #VerizonRefunds!
Reply · Like · Mark as Spam
Recent