Intel has announced its new 12th Gen Intel Core family of mobile processors including the flagship Core i9-12900HK which the company says is the fastest mobile processor ever. 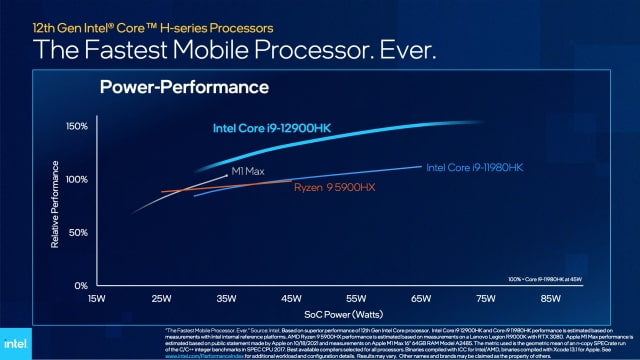 Based on the Intel 7 process, new 12th Gen H-series processors offer:
● Up to 5 GHz frequencies, 14 cores (6 P-cores and 8 E-cores) and 20 threads that give the 12th Gen Intel Core i9-12900HK the crown as the fastest mobile processor. It delivers performance leadership over Intel’s previous generation and the competition.
● The performance extends for unparalleled gaming experiences across top gaming titles and content creation tools. The new 12th Gen Intel Core H-series is the world’s best mobile gaming platform, delivering up to 28% faster gaming than the previous mobile gaming leader in the market: the Intel Core i9-11980HK. 12th Gen Intel Core H-series is more than up to the task for content creators. For example, users may see up to 43% higher performance in 3D rendering gen-over-gen.
● Broad memory support for DDR5/LPDDR5 and DDR4/LPDDR4 modules up to 4800 MT/s – a first in the industry for H-series mobile processors.
● Nearly three times faster connectivity on exclusive high-speed channels without legacy Wi-Fi interference. Using integrated Intel Wi-Fi 6E (Gig+) gives users the freedom to work and learn from home and relax with smooth, high-quality streaming.
● Thunderbolt 4 support that delivers transfer speeds up to 40Gbps and PC connectivity to multiple 4K monitors and accessories.
● Designed for enthusiast gamers, creators and engineering professionals who want to push their laptop performance to the next level, the new 12th Gen Intel Core H-series mobile processors deliver desktop-caliber performance on the go. 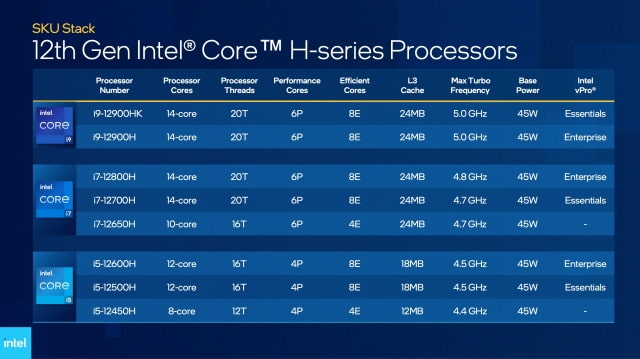 Intel says it based Apple M1 Max performance on public statement made by Apple on 10/18/2021 and measurements on an Apple M1 Max 16" MacBook Pro with 64GB RAM (Model A2485). It appears the benchmark used was SPEC CPU2017 from the SPEC consortium. Intel also claims that the i9-12900HK outperforms the M1 Max and M1 Pro in Photoshop, Lightroom, Autocad, Revit, Blender, and CrossMark benchmarks. 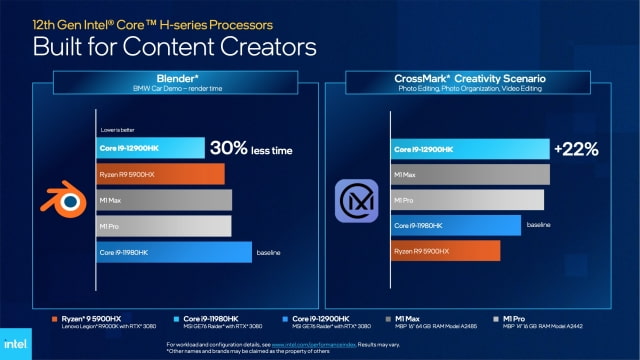 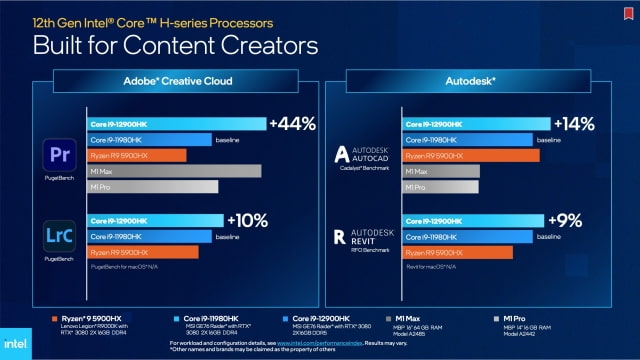 vipey - January 5, 2022 at 2:07am
Great for the consumer when the tech giants compete. But given Intel’s track record… I’ll keep it at arm’s length till they actually deliver the promises.
Reply · Like · Mark as Spam

McApple1 - January 5, 2022 at 1:26am
Call the Waaambulance! I’ll pass on their technology that’ll be outdone soon especially a company that backed out of their “promise” to not fund seditionists overturning the certified 2020 election let alone one that is still this toxic after divorcing from a company they know is better, and is also why they only compare themselves to the more perfect one like a bully attempting to belittle the better guys.
Reply · Like · Mark as Spam

onereader - January 5, 2022 at 1:03am
And just like that we get new tech, when big guys are fighting. When they were married there was nothing more than a small improvement each year now they need to show off what are they capable.
Reply · Like · Mark as Spam
Recent