Match Group has filed an antitrust lawsuit against Google over its plan to force developers to use the company's in-app billing system.

Match says, "Google seeks to eliminate user choice of payment services and raise prices on consumers by extending its dominance to the separate market for in-app payment (“IAP”) processors on Android. It is conditioning app availability on Google Play with exclusive use of its own in-app payment processing product, Google Play Billing, where it can charge supra-competitive prices and monetize the personal data of billions of digital app users."

The company says it's now being held hostage by Google.

Ten years ago, Match Group was Google’s partner. We are now its hostage. Google lured app developers to its platform with assurances that we could offer users a choice over how to pay for the services they want. But once it monopolized the market for Android app distribution with Google Play by riding the coattails of the most popular app developers, Google sought to ban alternative in-app payment processing services so it could take a cut of nearly every in-app transaction on Android. This Complaint lays bare Google’s misdeeds that made it possible.

Google is giving developers until June 1, 2022 to use Google Play's billing system or they will be removed from Google Play. This is extended from a previous deadline of March 31, 2022.

In a statement to Engadget, Google notes that the "openness" of Android allows Match to distribute its app via sideloading if the company "doesn't want to comply" with its policies.

"This is just a continuation of Match Group’s self-interested campaign to avoid paying for the significant value they receive from the mobile platforms they’ve built their business on," a Google spokesperson said. 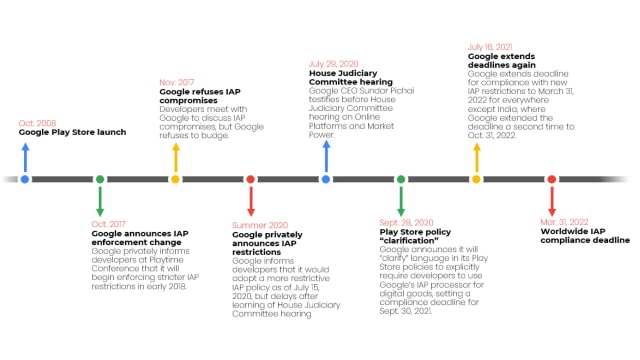