The first iPhone 4 class action lawsuit has been filed against Apple and AT&T in the United States District Court for the District of Maryland.

The lawsuit was filed by Ward & Ward, PLLC and Charles A. Gilman, LLC. on behalf of Kevin McCaffrey, Linda Wrinn, and others.

Lawfirm Kershaw, Cutter & Ratinoff is also investigating potential problems with the release of iPhone 4 for a possible class action lawsuit. 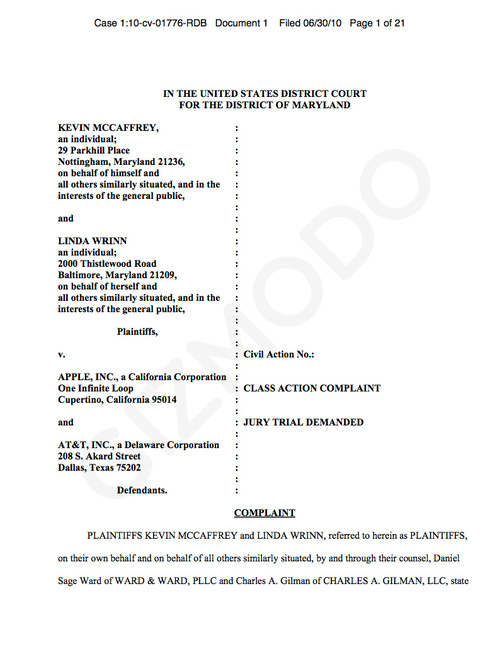 NIk - July 1, 2010 at 4:16pm
Come on people its just a Damn phone... Sometimes in the real world shit doesnt always work the way these companies hope... I have sold electronics for over 10 years and let me tell ya sometimes they fuck up... Its the way of the world, and there is way to many people (white trash) that are trying to get a easy buck. I puchased the Iphone4, and sure there are some things that are fubar. But Apple will continue to make it better, just like they always do...
Reply · Like · Mark as Spam

nmk - July 2, 2010 at 12:07pm
the point is the lawyers get paid no matter what -- nothing is going to come out of this except the law firm and partners lining their pockets --- also if i recall correctly, just a few days ago they were actively seeking people to join the class action -- again, not going anywhere -- just how the lawyers maker their money
Reply · Like · Mark as Spam

Hash - July 1, 2010 at 2:27pm
Don\'t you have 30 days to return the phone? I\'m wondering the point of these class action lawsuits, since they just make the lawyers money and practically nothing for the average user. Anyways, iPhone 4 reception is a huge down-step compared to their other phones... Steve Jobs should be \"magically\" embarrassed...
Reply · Like · Mark as Spam
5 More Comments
Recent